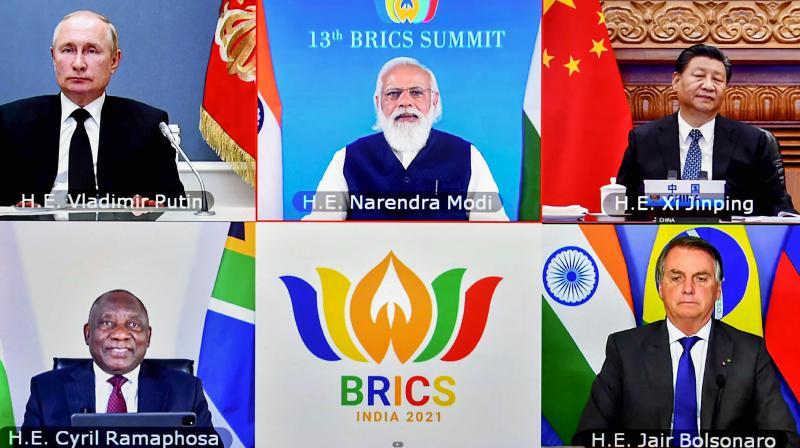 They also reaffirmed their commitment to implement the strategy for Brics Economic Partnership 2021-25 and welcomed the launch of the Brics agricultural research platform. (PIB/PTI)

New Delhi: At the 13th Brics (Brazil-Russia-India-China-South Africa) Summit on Thursday evening in a virtual format chaired by Prime Minister Narendra Modi, leaders of the five nations adopted the New Delhi Declaration that said Afghan soil should not serve as a terrorist sanctuary to carry out attacks against other countries or become a centre for drug trafficking.

This comes less than a month after the Pakistan-backed Taliban grabbed power in Afghanistan and can be seen as a strong message to Islamabad despite the fact that its all-weather friend China is part of Brics.

Russian President Vladimir Putin set the tone in his inaugural remarks, arguing that Afghanistan should not be a threat to its neighbours by becoming a centre for terrorism or drug trade even as he lambasted the Americans for the irresponsible attempt to impose “alien values” from outside and retreating, leaving the rest of the world to “clean up the mess”.

Mr Putin said that Afghans “have fought for decades and deserve to exercise the right to define (what) their state will look like on their own."

In a move that would please China, the New Delhi Declaration resolved that while the cooperation on study of origins of the Covid virus is an important aspect, the process “should be free from politicisation or interference”.

Chinese President Xi Jinping announced that China would “donate an additional 100 million doses of vaccines to fellow developing countries within this year”, apart from the $100 million donation to global vaccine initiative Covax. President Xi said that China has provided more than one billion doses of finished and bulk vaccines to over 100 countries and international organisations, and would strive to provide a total of two billion doses by the end of this year.

The five leaders also endorsed the Brics Counter-Terrorism Action Plan while condemning terrorism in all its forms including cross-border terrorism. National Security Advisor (NSA) Ajit Doval briefed the five leaders on the Action Plan that aims to “further strengthen existing mechanisms of cooperation in areas such as financing and combating terrorism, misuse of the internet by terrorists, curbing the travel of terrorists, border controls, protection of soft targets, information sharing, capacity building, and regional and international cooperation”. Brics also committed to combating terrorism financing networks and safe havens.

The five Brics leaders welcomed the signing of the agreement on Brics Cooperation on Remote Sensing Satellite Constellation and finalisation of the agreement on cooperation in customs matters. They also reaffirmed their commitment to implement the strategy for Brics Economic Partnership 2021-25 and welcomed the launch of the Brics agricultural research platform and the ongoing discussion on the Brics platform for digital public goods.

PM Modi in his inaugural remarks strongly pushed for “Intra-Brics cooperation for continuity, consolidation and consensus,” adding that “these four Cs are in a way the fundamental principles of our Brics partnership”. At a special briefing later, MEA’s secretary (CPV and OIA) Sanjay Bhattacharyya described Brics as a “happy family”.

On Afghanistan the five Brics leaders jointly resolved, “We underscore the priority of fighting terrorism, including preventing attempts by terrorist organisations to use Afghan territory as terrorist sanctuary and to carry out attacks against other countries, as well as drug trade within Afghanistan. We emphasise the need to address the humanitarian situation and to uphold human rights, including those of women, children and minorities.”