India   All India  10 Oct 2018  Scrambling up the entrepreneurial ladder in Khandwa
India, All India

Scrambling up the entrepreneurial ladder in Khandwa 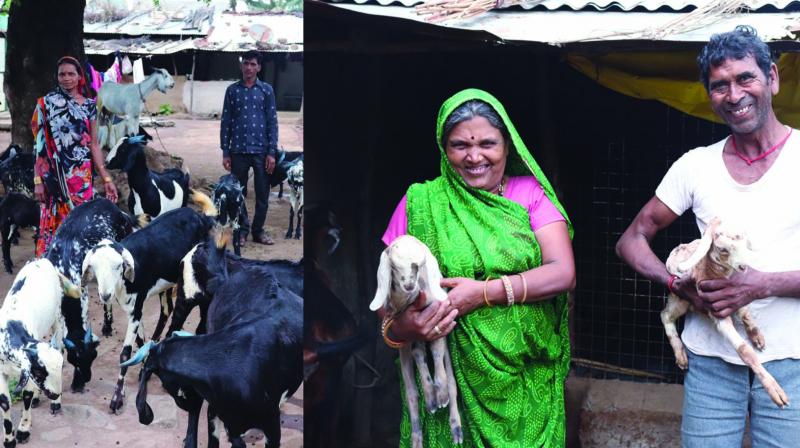 Goat and poultry rearing are the second livelihood options after agriculture with 7,668 households in goat-rearing and 2595 in poultry as per a survey in March this year.

Mohan Bare, 36, a Bhil adivasi from Ardale village, Pandhana block of Khandwa district of Madhya Pradesh, is setting new goals for landless tribals who wish to soar and seek recognition as entrepreneurs. It is the humble goat, training in goat rearing, hand holding by the Aga Khan Rural Support Programme- India (AKRSP-I) and personal endeavor that has enabled Bare to become the most successful goat breeder in the 28 villages of Pandhana block.

Kalu Singh Muwel, the CEO of the Pandhana Pashu Palan Producer Company, has been showcasing him as an entrepreneur, taking him on exposure visits to adjoining districts of Burhanpur, Khargone and Barwani in the Nimar region. Also planned are visits to Mumbai and Hyderabad, which have the biggest goat markets. Bore takes such excellent care of his goats that since 2014 when AKRSP gave him four goats and a buck to improve his livelihood, just one 35 day kid died. “I was still new in goat rearing and made the mistake of bathing it in the cold water of the dam and it died of pneumonia,” says Bore.

In 281 of the 841 Nimar region villages AKRSP works in, 90 per cent of the population is tribal, poor and living in mud huts. Goat and poultry rearing are the second livelihood options after agriculture with 7668 households in goat rearing and 2595 in poultry as per survey in March this year.  Though both men and women are into goat rearing but the 89 trained vets or pashu sakhis for goats and poultry are all women.

Incomes from poultry and goat rearing have gone up from Rs 15,000 to Rs 44,000 per annum in the area but Bore, with 26 goats and 9 bucks is making Rs 2 lakhs annually and spends Rs 42,000 on the education of his three children in private schools in Khandwa.  To be a successful entrepreneur, Bore calculates he would need 44 goats and 6 bucks.  A goat shed at a cost of Rs 1,70,000 to house 50 goats is on the anvil. Only after that will he build a pucca house and move out of his mud hut.

Bore’s rise to his present status is as impressive as that of any big Mumbai industrialists. He studied in an adivasi balak ashram up to Class 5, was only 12 when he became a daily wage labourer and later a migrant labourer. His fortune turned only when he was introduced to goat rearing.

He looks after them like a stud farm owner would look after his race horses. Once in 15 days each goat is cleaned with lime; their feeding is a measured 250 grams of wheat and maize morning and evening and he takes them out grazing twice in a day. The goats are encouraged to lick salt bricks, procured from the pashu sakhis, for improved consumption of water, blood circulation and digestion that ensures a shine to their coat.

He would prefer if his goats produced one or two kids at a time so that they get more milk from the mother and are healthier. The chances of a kid dying are more if there are three but Bore takes extra care in their rearing and feeding to ensure survival. If an animal falls ill, its hair stands up and he quickly calls the Pashu Sakhi.

Bore speaks Hindi and is conversant in English and  can browse the net for information on goat rearing. “On the net I read about engineers who have taken to goat rearing because it is profitable,” he says. Over the last four years he has fine-tuned his knowledge on goat rearing, medicines and is market savvy.  While Muslims prefer sacrificing white and red, blemish free goats which are about a year old and have two teeth, there is a market for shiny black goats among Hindus during Dussehra, Holi and other festivals.  While an 11 months buck fetches Rs 11,000 to Rs 12,000, a handsome 14 months buck goes for Rs 18,000. Births, grooming and sales happen twice or thrice in a year in the markets at Borgaon and Jhirniya.

In the adjoining village of Udaipur, Bali Ram and his wife Sobai, like Mohan Bore, were landless labour but thanks to goat rearing and poultry, to which they were introduced few years ago, there has been a marked improvement in their economic status. Barely 20 days before this journalist met them, Bali Ram had sold two goats, each weighing 30 kg, at the Borgaon Eid mandi. Each was sold for Rs 18,700.

It was Sobai’s Saraswati Samooh(Self Help Group) that advised her to go for goat rearing and poultry so that she could look after her five children better.  With a loan from the samooh and her own savings she bought four goats for Rs 13,500 in 2014. Today she has 13 goats. Every year the income from sale of goats has been rising. In 2017/2018, she sold six goats, four young goats that were not keeping well for Rs 4000 and two bucks for Rs 18,000. When the first goat was sold for Rs 5000, the family bought a TV to keep children at home and happy. The following year, she was able to construct a toilet and subsequently a goat shed.

With her income from goat rearing, she is paying for the education of a widowed daughter’s son as well as her and her daughter’s instalments to the Samooh.  Even today Sobai does labour work, but ensures one member of the family is always there to look after the goats and take them grazing twice in a day. With labour work available just two to three months in a year,  goat rearing provides continued sustenance. As a shareholder of the Pandhana Pashu Palan Company, she gets quick medical assistance for the goats and loans for animal rearing. All the 110 families of Udaipur village rear the desi Satpura high bred variety of goats. The number of goats varies from two to three for those who have just started goat rearing, to 10 to 12 goats in families who have been in the business for a few years. With the support of Samoohs and the Pashu Palan Company, several families are also into the poultry business. Sobai kept chicks twice — 50 one-day old chicks and the second time 100 one day old chicks. The purchase price of each chick was Rs 25. Another Rs 1400 to Rs 2100 was spent on dana (grain) at Rs 1400 a quintal. After a month the 50 chicks were sold for Rs 8000 and 100 for Rs 16,000. During summer and when it rains, chick rearing becomes difficult.

Gurpreet Bhatia, AKRSP’s cluster manager at Pandhana, has found that the incomes of those maintaining poultry increases by Rs 10,000 every two to two and half months.  In a year, that is over six cycles of raising and selling chicks, the income could be Rs 60,000. The livelihood support system was steered through the SHGs of 40 villages from 2005/2006. They have taken loans up to Rs 3 crore for agriculture, education of children, goat keeping and poultry and for improving their livelihood options.  The big plus point is that no one from Udai-pur village goes to the money lender any more. To improve the health and survival rate of goats and poultry, a cadre of Pashu Sakhis has been identified and trained to service the villages. The Pashu Sakhis also keep goats and poultry and get an additional income of Rs 2000 to Rs 2500 for the work they do as para vets. They also prepare the salt bricks of molasses, wheat residue or chokker, salt and various minerals that improve the health of goats and poultry.

They sell each salt brick for Rs 65 or Rs 90 if well packaged and keep the profits. Pashu Sakhis Rekhabai and Tarabai are responsible for Udaipur and an adjoining village. They wear blue saris and blouses provided by AKRSP and can be easily identified in the village. Their training over eight days was at Khandwa by representatives of the Goat Trust, Lucknow, and the Institute for Veterinary Research, Bareilly.

The Pashu Sakhis have still to be taught castration, a necessity for ensuring better growth of the goats. They charge per service—so it is Rs 3 for deworming and vaccination of which a rupee is the Pashu Sakhi’s profit. Medical assistance and providing tablets to deal with fever, colds, coughs and diarrohea costs Rs 10. The change is discernible.  Sobai, Bali Ram, Rek-ha Bai and Mohan Bore symbolize the changing face of the tribals of Nimar .