India   All India  10 Oct 2019  Here's how you can enjoy free food in exchange for plastic waste in Chhattisgarh
India, All India

The tagline of the cafe says, 'More the waste better the taste'. 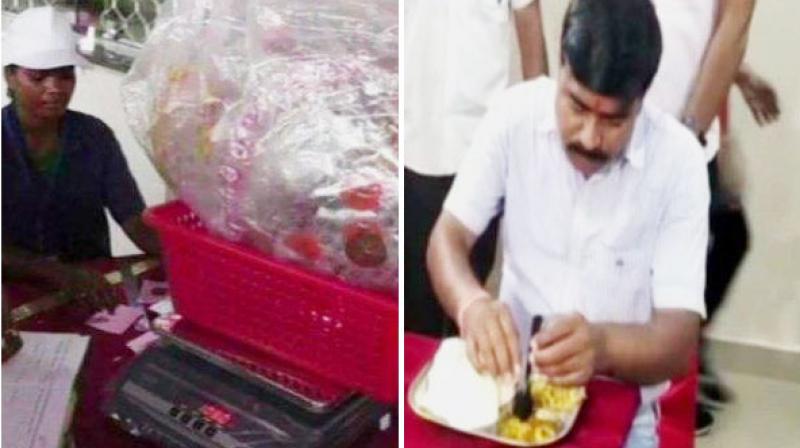 The concept of this cafe is that people can get their plastic waste weighed and enjoy a warm meal in return. (Photo: ANI)

The cafe, situated in Ambikapur, which bagged the title of the second cleanest city in India, through the initiative, will provide impetus to Prime Minister Narendra Modi's 'plastic-free' India resolve.

"I am so proud of this unique idea and initiative, taken by AMC. The entire nation took several measures and steps to discourage using Single-use plastic on Mahatma Gandhi's 150th birth anniversary. But AMC took such an innovative step to keep the city plastic-free, I feel so good. This initiative has achieved support on the national and international level," said Singhdeo.

The concept of this cafe is that people can get their plastic waste weighed and enjoy a warm meal in return.

"When I got to know about this cafe, I started collecting and storing plastic waste from my house. This is a great initiative to make the citizens aware to keep the city plastic-free. Through this initiative we can get two benefits, first, we can keep our vicinity clean and second, we can get delicious food in exchange for plastic waste," said a resident.

The tagline of the cafe says, 'More the waste better the taste'.

"I brought half a kilogram of plastic waste and got delicious food here. I think this is a great step taken by AMC. The food quality is also very satisfactory," said another resident.

According to the cafe staff, a lot of citizens have extended their support and lauded the initiative taken by the AMC. The plastic waste collected by the people coming here is ultimately sent to the Municipal Corporation for disposal.

"AMC has made headlines many times in the last five years across the country, for its steps taken to keep the city clean. Now, in a bid to keep the city plastic-free we have inaugurated the Garbage Cafe where we are providing food in exchange for plastic waste. We have taken this initiative to discourage the use of plastic. We will promote this cafe to attract more citizens," Dr Ajay Tirkey, Mayor.

The cafe has been set up by Ambikapur Municipal Corporation (AMC ).