India   All India  10 Nov 2018  AIADMK attacks Rajinikanth for remarks on protests against 'Sarkar'
India, All India

AIADMK attacks Rajinikanth for remarks on protests against 'Sarkar'

AIADMK mouthpiece questioned Rajinikanth's statement on how demands for removal of scenes from film certified by censor board could be made. 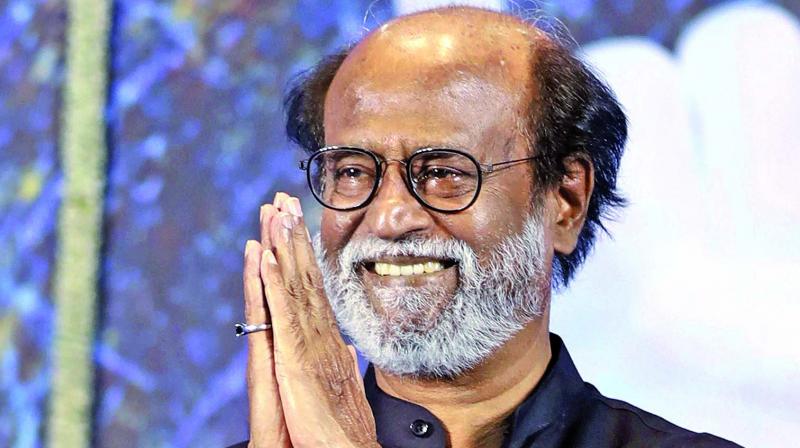 Rajinikanth had lashed out at the All India Anna Dravida Munnetra Kazhagam (AIADMK) yesterday for its protests against certain scenes in actor Vijay's Diwali release, 'Sarkar'. (Photo: File)

Chennai: The AIADMK hit out at Tamil superstar Rajinikanth today for slamming its protests against certain scenes in the Vijay-starrer "Sarkar", saying a mere censor certification would not justify contentious scenes.

As the controversy was around the government's freebies schemes, the ruling party in Tamil Nadu equated those to providing reservation benefits to the deprived classes.

Rajinikanth had lashed out at the All India Anna Dravida Munnetra Kazhagam (AIADMK) yesterday for its protests against certain scenes in actor Vijay's Diwali release, "Sarkar", questioning the rationale behind protesting against a film certified by the censor board.

He had "strongly condemned" the demands for deletion of scenes in the film.

A write-up in AIADMK mouthpiece "Namathu Puratchi Thalaivi Amma" questioned Rajinikanth's statement on how demands for removal of scenes from a film certified by the censor board could be made.

"Top star, give a frank response. If you find a lizard inside a packed food product that has all certifications, will you throw it away or consume it saying it has the required certifications," it said.

It asked the veteran star to "advise" the film's director, AR Murugadoss, and not defend "a mistake" by showing the censor certificate.

Even if a "misinformation" in a film passed the censor test, it "has to be stopped", it said in an apparent defence of the protests against the scenes and the demand for their removal.

The makers of "Sarkar" had yesterday removed certain "objectionable" scenes and "muted" an apparent reference to late Tamil Nadu chief minister J Jayalalithaa as the Sun Pictures venture faced a backlash from the AIADMK over the depiction of its welfare schemes and its leader.

The AIADMK was up in arms against "Sarkar" with senior ministers demanding deletion of the scenes reportedly showing mixer-grinders being burnt, seen as an obvious reference to a freebie scheme involving the object.

The ruling party also took exception to a purported negative character played by a woman carrying a name deemed to be that of Jayalalithaa.

Strongly defending the freebies, the party mouthpiece equated it to the quota system.

"The freebies are like the reservation system that was brought to bridge the poor-rich divide," it said.

Further, taking on actor Vijay, Murugadoss and Sun Pictures' Maran Brothers, it said these "affluent" people might "look down upon freebies" but the Amma canteens served thousands of aspiring filmmakers in the tinsel town.

Another brand Amma scheme named after Jayalalithaa, these canteens serve delicacies like idli and chapati, besides rice varieties, at heavily subsidised rates and are popular among the masses.

"Aren't the (free) mixers and grinders godsent for the havenots?" the AIADMK mouthpiece asked.

It alleged that despite being aware of all these, the intent of the makers of "Sarkar" was to "incite" people against the government and added that most of the welfare schemes launched during the AIADMK regime were now being followed by some other states.

It lashed out at the film crew for naming a character apparently referring to Jayalalithaa.

Taking a swipe at actor Vijay's reported political ambitions, the party said he was "dreaming that he can become the chief minister just by mouthing emotional dialogues against the government".