It was released in the wild after it was reintroduced to its natural food chain. 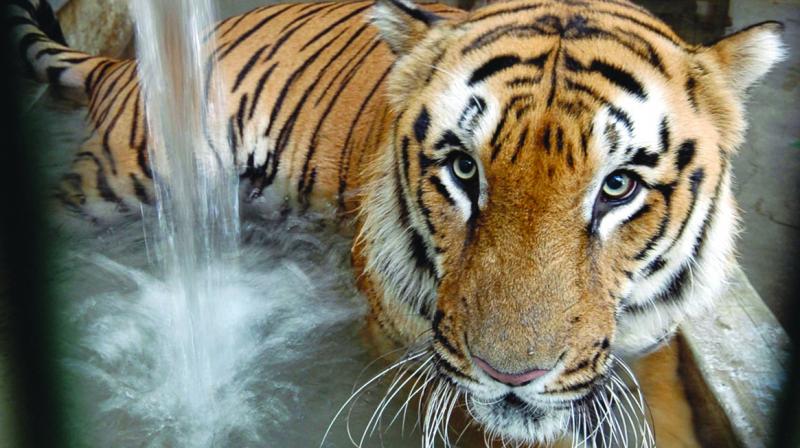 A tiger at a zoo in Madhya Pradesh.

Bhopal: The wildlife conservation model of Madhya Pradesh envisaging “rehabilitation” of “man- eater” tigers has come into sharp focus in the wake of shooting tigress Avni, that purportedly killed 13 people in Maharashtra, triggering an outrage among animal lovers.

In the past one decade, at least 70 tigers in Madhya Pradesh that had attacked or killed humans after being caught in conflict situation with them in different wildlife sanctuaries or reserve forests in the state, were removed from their habitats, put in quarantine and later released in the wild after being reintroduced to their natural food chain.

“If my memory serves me right, I can vouch that not a single big cat which attacked or killed human beings has so far been killed,” Rajnish Singh, spokesman of forest department of MP government,  told this newspaper.

According to him, half-a-dozen such big cats have been reintroduced to their food spectrum in last one year itself by adopting the conservation model. If there are reports of a tiger killing humans, the chief wildlife warden of a state can take a call either to kill or “reform”a big cat to restore their natural food habit.

But, MP has so far ensured that the “rogue” tigers do not meet the fate of Avni.

“We have the expertise  to reintroduce such big cats to their natural food chain. Besides, we are also armed with required logistics for the purpose,” Mr Singh said.

The successful rehabilitation of three such big cats, including a tigress, in the recent past speaks volume on the wildlife conservation model of MP forest department.

An adult tigress of Kanha National Park had killed a woman in a village in the buffer zone of the park. It was rescued by park authorities and then put in an enclosure for six months.

It was released in the wild after it was reintroduced to its natural food chain. In another instance, two tigers who purportedly killed three children in Budhni were put in quarantine and released in the core area of the forest to ensure they lived among their prey bases.

“The term, man-eater, is a misnomer. No tiger ever turns man eater. In fact, human beings do not constitute food spectrum of tiger species. The big cats sometimes attack human beings in self-defence and sometimes kill them when they suffer from illness that prevents them from hunting,” said wildlife conservationist Faiyaz A. Khudsar.

“Each tiger in the wild plays key role in ecological balance in their regions. There are very few free ranging tigers (those in wild) left now. Killing of a big cat is not a wise option. Because, in that case, we lose a species of particular gene pool,” Dr Khudsar said.