Across many Muslim dominated localities in the twin towns, most confined themselves to their homes. 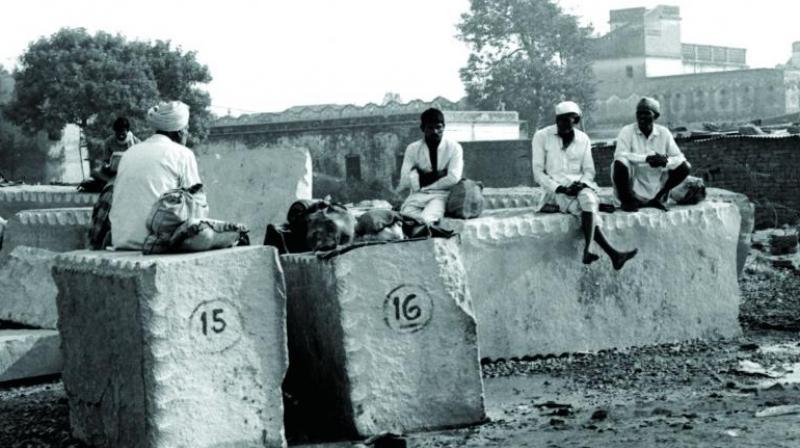 The wait is getting over Kar Sevaks resting on partially carved stone slabs to be used as pillars of the proposed Ram temple near Babri Masjid. (Photo: Archive of Sondeep Shankar)

Ayodhya: Gently running his fingers through his long white silky beard, Maulvi saab, as he is fondly known, sat in one corner of the deserted street gazing at the buntings erected for Milad Un Nabi in the Muslim- dominated Bhadarsa locality.

Ask him about the Ayodhya verdict that has come on Saturday, and the 74-year old smiles as he says that the judgment was on expected lines.

“Let’s not act as if we’ll not know what the verdict would be like. We all had anticipated that. First it was triple talaq, then scrapping of Article 370 from Kashmir and now this (Ayodhya verdict). Not many will like to say it openly but the designs of some powerful people is getting clear to us now,” he says.

Reminded that it was the court’s verdict and the government had nothing to do with today’s judgment, Maulvi saab laughs it off, making clear his disagreement.

Minutes after the Supreme Court read out the historic judgment in favour of Ram mandir, Muslims across the twin towns, though remained calm, felt that the BJP had lost its last chance of winning the confidence of the community.

What was even more disturbing for them was that the verdict came on a day when the Muslim community was looking forward to celebrate Milad un Nabi — the birthday of prophet Mohammed. Due to security concerns, the Faizabad district administration has banned all kinds of processions and gatherings including the Milad un Nabi “juloos” or procession.

“We are not against any community. But since morning, have you not seen Hindu community crediting Modi government for the verdict ? Even TV channels will do it soon. If we blame Modi government for it (verdict not coming in our favour) we are wrong, right ?” asks Arif Muhammed, a college-goer and resident of Benigunj.

All of them base their argument on the saffron party’s election manifesto which promises to construct a ram mandir at ayodhya.

Maulana Abdul Rashadi Madni, who runs a Madrasa in Azamgarh, says that the Muslim community was deeply hurt when the Babri masjid was razed and says he is equally hurt now. “All Muslims would have become BJP supporters had the verdict come in their favour. Now, it is difficult to trust the Supreme Court,” he says.

It was back in 2012 that some BJP and VHP leaders had coined the slogan “UP mein banega Gujarat, Faizabad se hogi shuruvaat”  —  and many say that this is coming true now.

Among many muslims Deccan Chronicle randomly spoke to, almost all of them said they had anticipated the judgment and it did not surprise them one bit.

“You heard TV channels say even Muslims want a temple to be constructed at the site and they want an end to the dispute. Just because some Muslims who call themselves our leaders are in the payrolls of the BJP, it does not mean that all of us are of the same opinion. Faith is as important a matter for us as it is for Hindus,” says Abdul Mateen, a small time trader in Sahabgunj.

Across Muslim dominated areas, a pall of gloom has descended soon after the verdict. Green flags, banners and buntings were everywhere but there were no celebrations.

“Leave alone the verdict, we are now not allowed to celebrate the most important event in Muslim calendar. We definitely did not see this coming,” said Abdul Subhan of Rikabgunj.

Across many Muslim dominated localities in the twin towns, most confined themselves to their homes while groups of people were seen engaged in discussions. That they were dejected was something no one could have missed.

By evening, several locals celebrated by lighting diyas. Some burst crackers. It was like Diwali.