If BJP-Sena does not form the govt, then Congress-NCP will try to form an alternative government, he said. 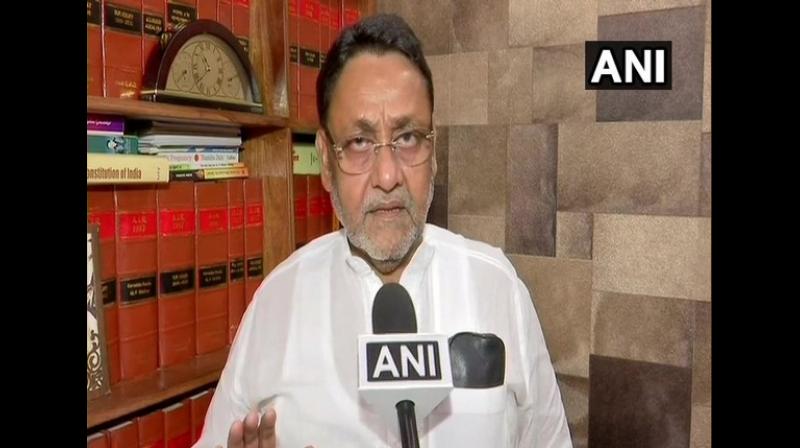 NCP leader Nawab Malik said, 'If BJP-Shiv Sena forms the government, we will sit in Opposition. If they don't form the government, then Congress-NCP will try to form an alternative government.' (Photo: ANI)

Mumbai: NCP leader Nawab Malik on Sunday said that his party MLAs will be meeting on Tuesday to discuss the political situation and will try to form an alternative government in Maharashtra if the BJP-Shiv Sena alliance fails to do so.

"We have called a meeting of all our MLAs on 12th November to discuss the political situation in the state," the NCP leader said.

"The Governor yesterday invited BJP to form the government. We think this process should have begun 15 days ago," he said.

He also expressed apprehensions about the poaching of MLAs due to none of the parties having the majority numbers and made it clear that NCP will vote against the BJP if the party takes the oath.

Expressing surprise about Congress leader Milind Deora's tweet wherein he urged the Governor to invite Congress-NCP alliance to form government in the state, the NCP leader said, "It is surprising to see his tweet. The second-largest party is Shiv Sena if they are also not ready, then we are on the third. I don't think we will be called. If Shiv Sena gets a chance to form the government then Congress-NCP will take a decision."

In his tweet, Deora had said, "Maharashtra's Governor should invite NCP-Congress - the second largest alliance - to form the government now that BJP-Shiv Sena has refused to do so."

Malik's statement comes after Shiv Sena leader Sanjay Raut said that if no other party is willing to form the government in Maharashtra then his party is ready to stake claim.