Shivpal Yadav also mounted a scathing attack on the BJP and said that the entire country and every section of society was living in tension. 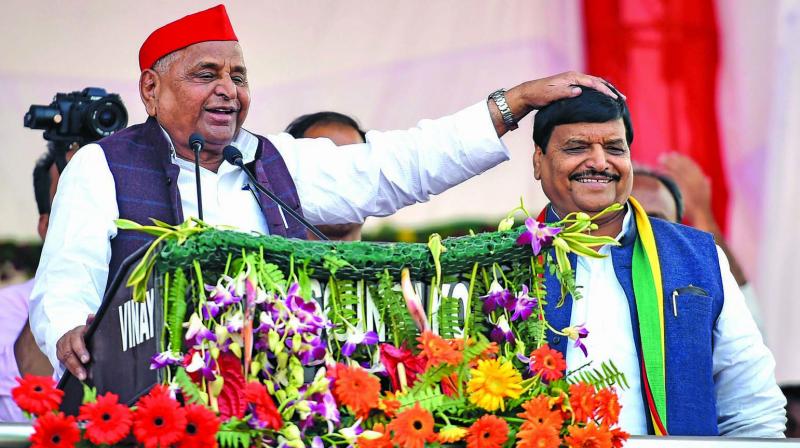 Lucknow: Samajwadi patriarch Mulayam Singh Yadav once again sprang a surprise when he arrived to attend the “Janakrosh” rally organised by his younger brother Shivpal Yadav on Sunday. Mr Mulayam Singh Yadav’s unexpected presence at the rally served as a major boost for the Shivpal faction since earlier in the week Mr Yadav shared the dais with his son Akhilesh an cousin Ram Gopal Yadav in Ferozabad. The signal was that he had chosen his son over brother Shivpal.

Addressing the rally organised by his newly-floated  Pragatisheel Samajwadi Party (PSP), Shivpal Yadav said: “Sirf samman manga tha (from Akhilesh Yadav)  but never got it. I waited so long, then I have formed this party with the blessings of Netaji (Mulayam)”.

Turning to Mr Mulayam Yadav, he said: “I sought your permission to form this party in the presence of Bhagwati Singh, Ram Sewak Yadav... both of whom are here. You gave me permission in front of these senior leaders.” He said that mischief makers were responsible for dividing a wedge in the family and made him strike a separate path.

With this, Shivpal Yadav set at rest all speculation that he had revolted against his older brother to form the party. Shivpal Yadav also mounted a scathing attack on the BJP and said that the entire country and every section of society was living in tension.

“Whether it is farmers, youth, girls, traders — all of them are unhappy.  The massive response to this rally is an expression of the anger against the BJP and the change must begin form here,” he added.

In a direct attack on Prime Minister Narendra Modi, Mr Shivpal Yadav said: “The Prime Minister says that his chest measures 56 inches. It may have increased to 57 inches now, but there seems to be no strength in him because Pakistan is increasing its activities in the country and our soldiers are dying every other day.”

Mr Shivpal Yadav also recalled it was the Mulayam Singh Yadav government in 1989-90 that protected the Babri Masjid, which was ultimately demolished in 1992 while the BJP was in power in the state.

Mr Mulayam Singh Yadav’s younger daughter-in-law Aparna Yadav, in her speech, said the milling crowds at the rally proved the adage that one must not hurt the lion. “When Netaji was hurt, he became a politician from a teacher, and now Chachaji (Shivpal) has been hurt and you will soon see the outcome.  Today is the day of change and I will support him (Shivpal) always to the best of my abilities,” she added.