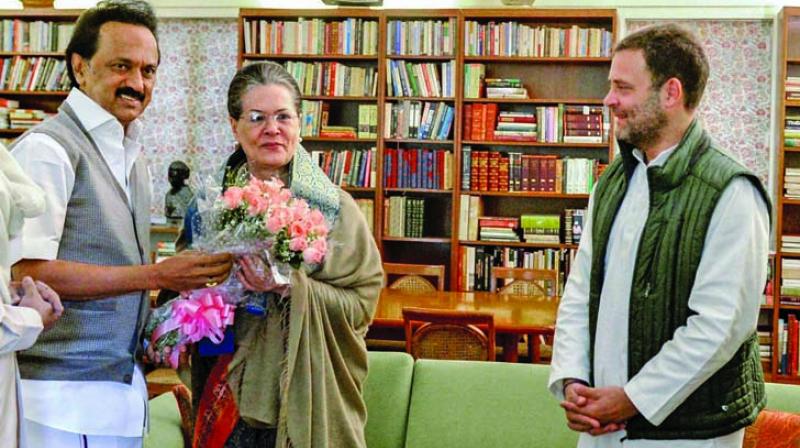 New Delhi: Top Opposition leaders, including several high-profile chief ministers, will huddle in the national capital on Monday to discuss strategies on forming a grand alliance to take on the ruling BJP in the 2019 Lok Sabha polls. The meeting, significantly, comes a day before the results of the Madhya Pradesh, Chhattisgarh, Rajasthan, Telangana and Mizoram Assembly polls are due to be announced and the Winter Session of Parliament is scheduled to begin.

Mr Chandrababu Naidu had taken the lead in gathering all the non-NDA parties to try and form a joint strategy ahead of the 2019 polls to take on the BJP. Last month, Mr Naidu met Mr Rahul Gandhi in New Delhi. CPI leaders D. Raja and Sudhakar Reddy have confirmed their participation as they were allies of the Congress alliance (mahakutumi) in the Assembly polls in Telangana. The CPI(M) will also be sending its representative to the meeting.

It is not yet clear, however, if BSP supremo Mayawati will attend the meeting or not. Delhi chief minister Arvind Kejriwal is also expected to attend.

On Sunday, meanwhile, DMK president M.K. Stalin met Congress president Rahul Gandhi and UPA chief Sonia Gandhi and discussed a range of issues. It was, incidentally, Mrs Gandhi’s 72nd birthday, and the DMK leaders wished her on the occasion. Rahul Gandhi tweeted later: “Shri Stalin and senior members of the DMK visited Sonia Ji in Delhi today to wish her on her birthday. We had a warm & cordial meeting & discussed a range of issues.” In another tweet, he said: “I look forward to continuing our dialogue & to strengthening our alliance, that has stood the test of time.”

At Monday’s meeting, the Opposition parties are also likely to work out a common floor strategy for the Winter Session of Parliament, including their response to government bills and issues related to the Rafale deal and farmers, sources said.

Not only the heads of non-BJP parties, but also the chief ministers of Opposition parties from Kerala, Punjab and Puducherry were invited to the meeting, they added.

However, Biju Janata Dal president and Odisha CM Naveen Patnaik is unlikely to be a part of the meeting, the sources added, saying he might join the anti-BJP alliance after the general election.

This meeting was earlier planned for November 22, but had to be put off because of the Assembly polls in five states.