311 MPs vote in favour while 80 vote against it; Rajya Sabha likely to take up CAB today. 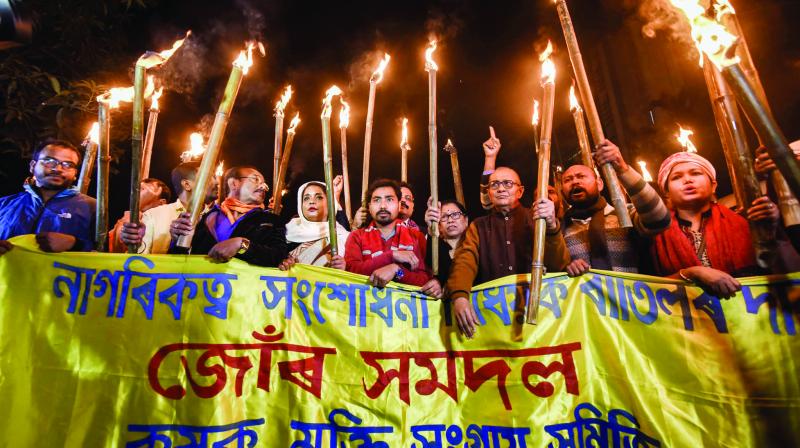 Activists of the Krishak Mukti Sangram Samiti take part in a protest against the Citizenship Amendment Bill in Guwahati on Monday. (Photo: PTI)

New Delhi: Amid intense debate over its legality and sparring between government and Opposition MPs over the Constitution’s spirit of secularism, the Lok Sabha passed the contentious Citizenship (Amendment) Bill (CAB) on Monday. During voting on the bill, 311 MPs voted in favour while 80 voted against it. The CAB seeks to provide citizenship to persecuted refug-ees or migrants of six communities — Hindus, Parsis, Sikhs, Jains, Christians and Buddhists — who live as minorities in India’s three neighbouring countries, Bangladesh, Afghanistan and Pakistan.

The CAB, which has been criticised for granting citizenship only to non-Muslim refugees of three Islamic neighbouring countries, is expected to come up in Rajya Sabha on Tuesday for its nod.

While the Opposition termed CAB as a regressive, discriminatory and divisive legislation that is against the basic character and intent of the Constitution, and is a means to target Muslims by treating them as “second-rate citizens,” Union home minister Amit Shah, while tabling the bill in Lok Sabha, said the CAB will provide safety net of citizenship to persecuted persons and denied that there is any political agenda behind it. The minister also made it clear that the government is determined to bring National Register of Citizens in the same way.

“This will not do injustice to anyone but bring justice to people who have been waiting for 70 years. There is no hidden political agenda. We had declared CAB in our election manifestos based on which 130 crore people have voted us to power. Those who are opposing this bill have an agenda on minorities. This bill has been a demand for years as several were persecuted (in our neighbouring countries),” Mr Shah said.

Rejecting claims that the bill is anti-Muslim, Mr Shah said, “We will have to differentiate between intruders and refugees. CAB does not discriminate against anyone and does not snatch anyone’s rights. It will not do injustice to anyone… This bill is not even .001 per cent against Muslims citizens of India. It is against infiltrators. If any member proves that this bill discriminates, I will take it back… Muslim citizens in India live with respect and will continue to do so.”

Mr Shah asserted that India has given similar rights to people in the past — in 1947 (Partition), 1959 (under  Dandakaranya Project for homeless refugees from East Pakistan), 1971 (during Bangladesh formation) and 1972 (when thousands of Indians were expelled from Uganda) by using the provision of reasonable classification provided under the Constitution.

Mr Shah added that even former Prime Minister Dr Manmohan Singh and BJP leader Lal Krishna Advani were refugees when they came from Pakistan. “All refugees were accepted due to which they (Dr Singh and Mr Advani) could become Prime Minister and deputy Prime Minister of this country,” Mr Shah said. He had earlier said that while India looked after its minorities well, Pakistan had failed to protect its minorities under the Nehru-Liaquat Pact.

“We do not discriminate on the basis of religion but India will not be a mute spectator when minorities are persecuted in neighbouring countries,” the home minister said and clarified that since various provisions were made in the past to grant citizenship to people, this time too it is a special provision. At the same time he made it clear that Rohingyas will not be allowed in India. “Those who want to allow infiltration for vote bank politics will not be allowed,” Mr Shah said.

At the same time, the minister praised former Bangladesh PM Sheikh Mujibur Rehman of Awami League and his daughter and present PM Sheikh Hasina for safeguarding the interests of minorities in that country. He, however, accused BNP and Khalida Zia’s regime of atrocities against Hindus, saying that’s the reason why they took refuge in India. In Afghanistan, Mr Shah blamed Taliban for atrocities on minorities.

While addressing apprehensions of the people of North East, who are strongly resisting CAB, Mr Shah said the Modi government is committed to protecting the customs and culture of people of the region. Elaborating on this, he said provisions of CAB will not be applicable to the tribal areas of Assam, Meghalaya, Mizoram and Tripura as included in the Sixth Schedule to the Constitution, and in the areas covered under the Inner Line Permit (ILP), notified under the Bengal Eastern Frontier Regulation, 1873. Currently, ILP is applicable in Arunachal Pradesh, Nagaland and Mizoram. He added that Manipur will also be brought under Inner Line Permit regime. Mr Shah further said his government will never touch Article 371 that grants special status to N-E states.

“I just want to tell the people that all the objections posed by north-eastern states have been addressed in this bill. There is no reason to get excited, there is no need to protest, enough has happened already, now this country just wants to go ahead peacefully,” Mr Shah said. He further clarified that under NRC no “Gorkha, Punjabi, Marwari, Bihari” etc living in the North East will be touched. “No Indian will be touched,” he added.

Earlier, Opposition leaders Adhir Ranjan Chowdhury, Saugata Roy, N.K. Premchandran, Gaurav Gogoi, Shashi Tharoor and Asaduddin Owaisi opposed the introduction of the bill, saying it was violative of various provisions of the Constitution, including granting citizenship on the basis on religion.

Senior Congress leader Shashi Tharoor submitted a notice in the Lok Sabha on Monday morning to oppose the CAB at the introduction stage on the grounds that it “violates” the fundamental right to equality. The bill violates the Fundamental Right to Equality prescribed by Article 14 since it infringes upon the principle of “equality before law” and “equal protection of laws” guaranteed to all persons, including non-citizens, Mr Tharoor said in his notice.

The CAB, Mr Tharoor said, “endorses the idea of religious discrimination by allowing individuals of only six religious identities to acquire citizenship while excluding those belonging to other religious identities”. He later said that the previous Partition (of 1947) was of soil, this bill is “partition of soul.”

The CAB was introduced after a division of votes for which 293 MPs voted in favour and 82 against it.

Opposing the bill, Congress MP Manish Tewari termed CAB as unconstitutional and contrary to the spirit of the Constitution, which is secular. “Citizenship is a sensitive issue. This bill violates Article 14, 15, 21, 25 and 26 of the Constitution. Equals cannot be treated as unequal. When a person comes to India, he is a refugee. You cannot discriminate against him on the basis of religion. The bill has to be equitable, just and non-discriminatory,” said Mr Tewari. He also mentioned Maldives, saying that even though it is an Islamic nation, the government has not mentioned its name in the list of countries.

Opposing Mr Shah’s statement that the Congress was responsible for India’s Partition in 1947, Mr Tewari said the foundation of the two-nation theory was laid at the Ahmedabad session of the Hindu Mahasabha in 1935 that was presided over by V.D. Savarkar, and not the Congress Party.

Congress leader of the House, Adhir Ranjan Chowdhury, while questioning the intention of the Modi government behind the CAB said even though India has borders with Sri Lanka, Nepal, Bhutan, China, Myanmar and Maldives, the BJP-led government has selectively chosen Pakistan, Bangladesh and Afghanistan because these are Islamic countries.

AIMIM’s Asadudin Owaisi termed CAB as “strategic security blunder” while accusing the government of suppressing Muslims and treating them as second-rate citizens. “You have said in CAB that those of these six communities who are being given citizenship will not face any litigation, which means cases against Muslims will continue… One-third of India is under China but why are you not talking about it? Because you are scared (of China),” Mr Owaisi said. He added that CAB is a way to legitimise the stay of those Hindus who got left out of the National Register of Citizens (NRC) and tore a copy of the bill in protest.

Opposing the CAB, the DMK’s Dayanidhi Maran called the bill “half-hearted” as it only included countries neighbouring North India. “What about Sri Lanka? Many persecuted Tamils from Sri Lanka come to India every year. Are you giving Citizenship to them as well?”

Mr Maran also questioned the exclusion of Sri Lankan Muslims and atheists. “When you (Amit Shah) talk about minorities, it looks like Satan is preaching gospels,” Mr Maran said.

The BJP-led NDA government had introduced the bill in its previous tenure and got the Lok Sabha’s approval. But it did not introduce it in Rajya Sabha, apparently due to vehement protests in the Northeast. That bill lapsed following the dissolution of the last Lok Sabha.