India   All India  10 Dec 2019  Asaduddin Owaisi tears up copy of Citizenship bill during siscussion in Lok Sabha
India, All India

'I oppose this Bill as it is against the Constitution and an insult to our freedom fighters,' Owaisi said. 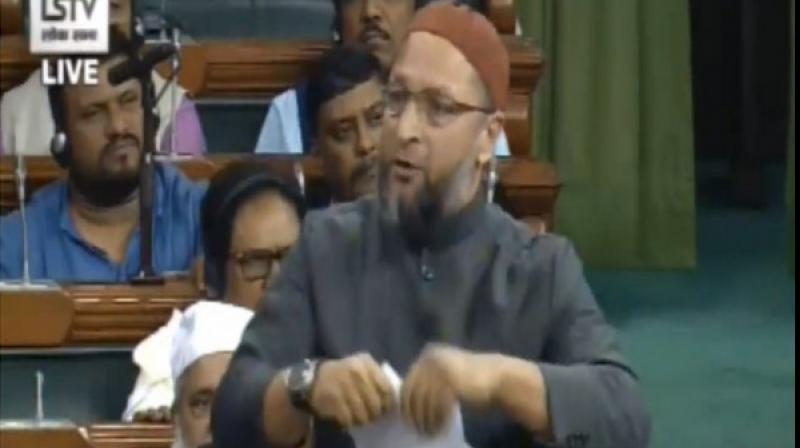 Owaisi said the Bill was not only the part of a conspiracy to make Indian Muslims stateless but would also lead to pose a risk to the national security. (Photo: ANI)

New Delhi: AIMIM president and MP Asaduddin Owaisi tore a copy of the Citizenship (Amendment) Bill, 2019, in the Lok Sabha, saying that the Bill tries to divide the country.

Speaking in the Lok Sabha, Owaisi said the Bill was not only the part of a conspiracy to make Indian Muslims stateless but would also lead to pose a risk to the national security.

Justifying his act to tear the Bill, Owaisi said that he was following the footprints of Mahatma Gandhi, who opposed the certificate which was issued to Asia-origin people in South Africa.

Addressing the Chair, he said: "You know madam how Mahatma Gandhi became Mahatma? He tore the national register card in South Africa. Since Mahatma tore that card, I am tearing this as it tries to divide the country."

"The government is hatching a conspiracy by the Citizenship (Amendment) Bill and the NRC (National Register of Citizens) to make Muslims stateless. I oppose this Bill as it is against the Constitution and an insult to our freedom fighters," he said.

During his speech, the AIMIM chief asked the Central government as to how many non-Muslims of Pakistan, Afghanistan and Bangladesh would be granted Indian citizenship under the Bill.

"This Bill has been brought so that one more partition can be done. This is worse than (Adolf) Hitler's law," he stated.

Cornering the government over the Bill, he further said: "It is certain that Taliban will come to power in Afghanistan, and when it happens, we will need Hazaras, Tajiks in India so that we can control strategically. But when they will come to power, India will lose its trump card."

"This is your strategy. I did not expect that you will commit such a blunder on strategic security," he added.

Earlier, while moving the Bill for the passage in the House, Home Minister Amit Shah denied that the Bill seeks to segregate people on religious line.

"There is no question of it doing injustice to anyone. With the passing of this Bill, lakhs of crores of people will get rid of torturous life and become citizens of India," he told the Lower House.