Krishak Mukti Sangram Samiti (KMSS) and its sister organisations have also extended their support to the bandh called by these organisations. 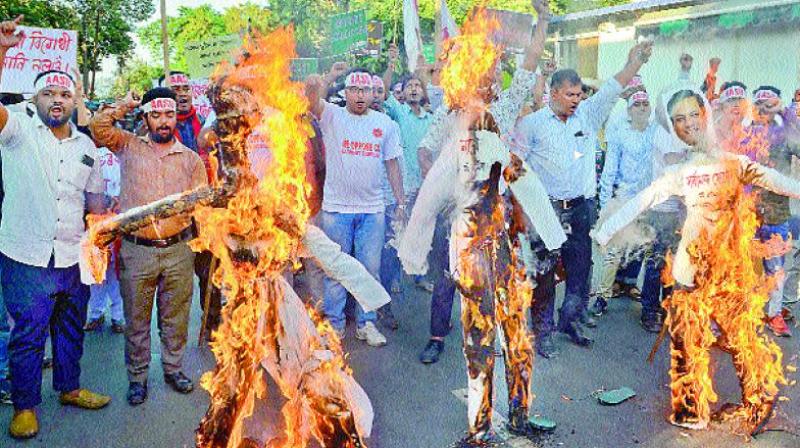 Guwahati: With the introduction of the Citizenship (Amendment) Bill in Parliament, students of Northeastern states have intensified their agitation with 16-left leaning organisations also calling for a 12-hour Assam bandh on Tuesday to protest against the legislation. The North East Students’ Organisation (NESO) has already called for an 11-hour Northeast bandh from 5 am on Tuesday on the same issue.

Krishak Mukti Sangram Samiti (KMSS) and its sister organisations have also extended their support to the bandh called by these organisations.

However, a bandh called by various tribal students’ bodies such as Sootea, Moran and Koch-Rajbo-ngshi on Monday failed to make any major impact. The bandh was supported by the KMSS also.

In a joint statement, 16 left-leaning organisations, including the SFI, DYFI, AIDWA, AISF, AISA and IPTA, demanded “scrapping of the bill” and called for “the 12-hour Assam bandh” from 5 am on Tuesday.

The Assam State Jamiat Ulama Hind has also supported the North East bandh, called by the NESO on Tuesday. However, Nag-aland has been exempted from the purview of the bandh in view of the ongoing Hornbill Festival.

Bogged down by ongoing mass resignation and protest at various places, the Asom Gana Parishad (AGP) on Monday decided to postpone its general council meeting, which was scheduled to take place on December 11.

The regional AGP MP, Birendra Prasad Baishya, who was avoiding appearing before the media on Monday said, “I oppose the CAB. It violates the Assam Accord, which had assured a Constitutional safeguard and protection to indigenous people.”

Meanwhile, Assamese actor Ravi Sarma resigned from the BJP in protest of the CAB while the Gauhati University decided to postpone examinations in order to avoid any untoward incidents on campus as students have intensified their agitations. Protesters, also pasted anti-CAB posters outside the residence of chief minister Sarbananda Sonowal and his Cabinet minister Himanta Biswa Sarma while others blocked trains at various places.

Maulana Badruddin Ajmal on Monday staged a protest against the CAB at Jantar Mantar.

The Asom Jatiyatabadi Yuba Chatra Parishad (AJYCP) has also extended its support to the Assam bandh called by the NESO and its youth body will stage a protest at Dispur on December 12. The All India United Democratic Front (AIUDF) led by A delegation of the Assam Pradesh Congress Commi-ttee, as part of its outreach programme on the issue, on Sunday met former Assam police DGP Hare-krishna Deka, educationist Udayaditya Bharali a-nd senior journalist Mo-noj Kumar Goswami.

The Asom Nagarik Sam-aj also took out a rally from Lakhidhar Bora Ksh-etra to Chhaygaon in Kam-rup district to sensitise the public about the harmful impact of the Bill.

As part of the rally, the organisation, comprising noted senior citizens of the state, distributed leaflets to the public about the Bill.

The Lekhak Shilpi Samaj, Assam also took out a procession from Guwahati Club to Panbazar.

Activists of the Lekhak Shilpi Samaj carried placards and shouted slogans to mobilise public opinion against the Bill as well as to unite artistes and writers of the state to form a strong deterrence to ensure that that the proposed legislation fails to alter the socio-demographic pattern of Assam.