Giving a similar explanation, Mr Rao said he had discussed with Delhi based leaders about the party’s poor prospects in the by-elections. 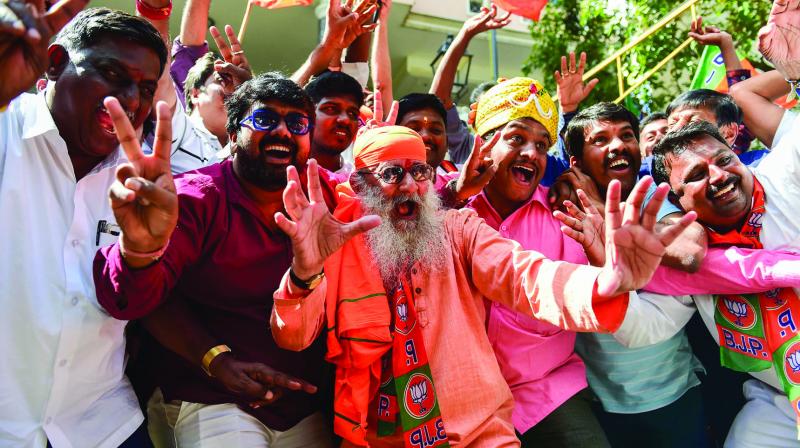 BJP supporters celebrate in Bengaluru on Monday after the party won in 12 out of 15 assembly constituencies of Karnataka. (Photo: PTI)

Bengaluru: Stung by the devastating loss in the bypolls in which the party could win only 2 of the 15 seats, Congress legislature Party (CLP) leader Siddaramaiah and Karnataka Pradesh Congress Committee (KPCC) president Dinesh Gundurao quit their posts on Monday, throwing the state unit into disarray. Both leaders tendered their resignation to Congress president Sonia Gandhi owning moral responsibility for not being able to give “satisfactory results.”

In his letter to Sonia Gandhi, Mr Siddaramaiah, a former CM, said: “I deem it necessary to step down as Leader of CLP by taking moral responsibility. As CLP leader, there is a need to uphold democratic principles. In the interests of the party, I tender my resignation as CLP leader.”

Giving a similar explanation, Mr Rao said he had discussed with Delhi based leaders about the party’s poor prospects in the by-elections. “If something goes awry, I will have to take a decision accordingly,” Mr Rao said.

Meanwhile, jubilant after the BJP’s stellar performance in the byelections, chief minister B.S. Yediyurappa on Monday said he would give a stable and pro-development government for the next three-and-half years of his tenure.

“Voters have given their verdict and the results are out. Now we have to focus on the development of the state. I will give good administration with the help of our ministers and MLAs,” the chief minister  told reporters.

On ministerial berths for the disqualified MLAs, most of whom have won the bypolls, the Karnataka chief minister added, “We had given an assurance to all the disqualified  MLAs that they will be made ministers. So, there is no question of backtracking from what we promised to them. We will make them state ministers and give them responsibility to grow our party base in their areas.”