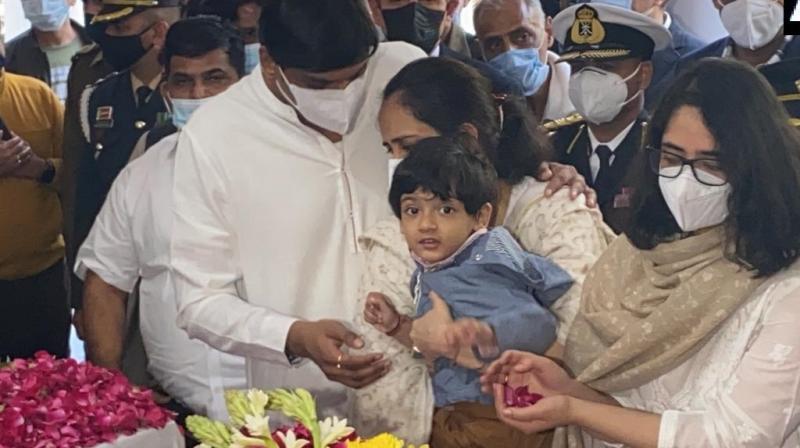 The grandchild of the CDS also paid final respect to grandparents.

General Bipin Rawat and his wife Madhulika Rawat were among the 13 people who died in the military helicopter crash in Tamil Nadu's Coonnor on Wednesday.

Delhi Lt Governor Anil Baijal also laid a wreath at the mortal remains of the CDS and his wife.

Also, religious leaders held a multi-faith prayer as they paid their last respects to the CDS and his wife.

5/11 Gorkha Rifles are looking after all the arrangements of the last rites of General Rawat who was commissioned in the unit and also went ahead to command it.

BJP leader Ravi Shankar Prasad termed the death of CDS General Rawat a great loss to the nation and said, "I Had great relations with CDS General Bipin Rawat...Such a brave commander...his wife and other soldier leaving like this is very painful. His death is a great loss to the nation. CDS with his courage and bravery made a place in every Indian heart. I express condolence to the loss."

The last rites of General Rawat will be performed later in the day with full military honours. The funeral procession will start from Kamraj Marg and reach Brar Square crematorium in Delhi Cantonment.

Group Captain Varun Singh, the lone survivor in the crash, has been shifted to Air Force Command hospital at Bengaluru for further treatment.

The Centre has ordered a 'tri service' inquiry into the accident. The inquiry will be headed by Air Marshal Manvendra Singh, Air Officer Commanding-in-Chief Training Command.

According to the sources, the black box of the chopper has been recovered from the crash site.