Gen Rawat's two daughters, Kritika and Tarini, performed the final rites and lit the pyre amidst a 17-gun salute by the Armed forces 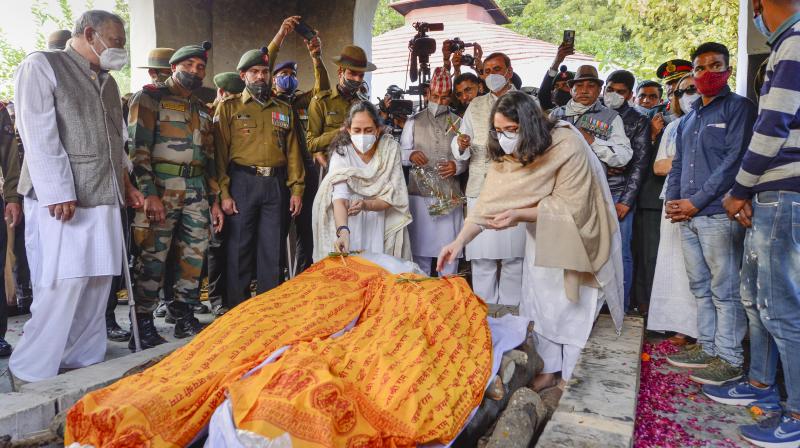 The final rites of Gen. Rawat along with his wife Madhulika Rawat were performed at the Brar Square crematorium in Delhi Cantonment and they were laid to rest on the same pyre for cremation.

Gen Rawat's two daughters, Kritika and Tarini, performed the final rites and lit the pyre amidst a 17-gun salute by the Armed forces. Some 800 armed forces personnel were present at the funeral of the CDS.

Gen. Rawat, his wife and 11 other military personnel were killed when the Indian Air Force's Mi-17V5 helicopter crashed on Wednesday afternoon near Coonoor in Tamil Nadu.

Earlier in the morning, Gen. Rawat's mortal remains were laid in state at his 3 Kamraj Marg residence to enable people to pay homage. Chief Justice of India N.V. Ramana, home minister Amit Shah, Congress leader Rahul Gandhi, Uttar Pradesh chief minister Yogi Adityanath among others paid their tribute to Gen Rawat. At around 2pm, Gen. Rawat's mortal remains were taken on a gun carriage decked with flowers and draped with the national flag to the Brar Square crematorium. People lined up along the whole route and were showering flower petals and chanting "Gen Rawat amar rahe".

In the morning the last rites of Brigadier Lakhwinder Singh Lidder (Defence Advisor to the CDS), who was among those killed in the air crash, were performed at Brar Square Crematorium with military honours.

"We must give him a good farewell, a smiling send-off, I am a soldier's wife. It's a big loss...," said Geetika Lidder, wife of Brigadier Lidder. She along with her 16-year-old daughter, Aashna, paid an emotional tribute to her husband. "There is more sadness than pride... life now is very long but... whatever. If this is what God wants, we will live with this loss. But this is not the way we wanted him back. If it was not meant to be... I don't know. But my child will miss him. He was a very good father," she said.

Meanwhile, senior officials said that the condition of Gp Capt Varun Singh, the lone survivor of the accident, is "critical but stable". He is undergoing treatment at Command Hospital Bangalore.