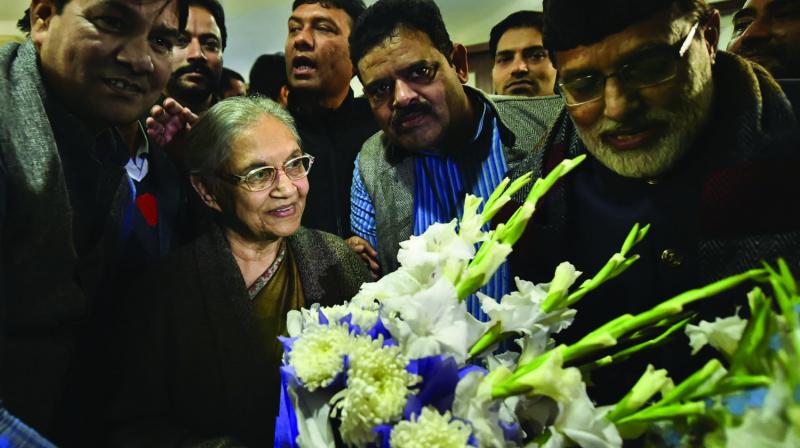 Former Delhi chief minister Sheila Dikshit being greeted with a bouquet at her residence after being appointed as the Delhi Pradesh Congress Committee (DPCC) chief in New Delhi. (Photo: PTI)

Ms Dikshit’s appointment as the Delhi Congress president is being interpreted in the party as the party’s ploy to project her developmental works during her 15-year-old tenure as the city’s chief minister against the works done by BJP and AAP in their four and five year tenures respectively.

This is also the first occasion when the party has appointed three working presidents to assist Ms Dikshit. It is to send a clear message to AAP and BJP that Congress is a strong contender in all the seven Lok Sabha seats in 2019 and that no one should take it lightly in the wake of the humiliating defeat it faced in the last Assembly polls.

Mr Chacko, however, made it clear that there were no talks within the Delhi unit about any alliance with the Aam Aadmi Party (AAP) and that the party was fully prepared to contest the parliamentary election on its own.

Mr Maken, who had worked as the parliamentary secretary and as a Cabinet minister with Ms Dikshit, congratulated her saying that under her leadership Congress would play the role of a powerful opposition against the governments in the national capital led by Arvind Kejriwal and at the Centre led by Narendra Modi.

Ms Dikshit (80) has been a three-time chief minister of Delhi. She had to face a humiliating defeat against chief minister Arvind Kejriwal in the New Delhi Assembly seat, following which she said she would not contest any other election.

Ms Dikshit’s appointment as the party’s Delhi unit chief is also being interpreted in the party as an effort to bring all warring factors under one roof to take on both AAP and BJP in the national capital.

After Congress faced humiliating defeat in the last Assembly polls, former city minister Arvinder Singh Lovely had to step down from the post of the party’s city head. Subsequently, the Congress leadership gave the charge to Mr Maken, who had been in-charge of the party’s communication unit. He had also represented the party twice in the Lok Sabha.

With the Congress leadership giving green signal to its media in-charge to contest the coming Lok Sabha elections, there are indications that Mr Maken may again be entrusted with the job of handling media at the central level.