Owaisi also said that the triple talaq bill was not acceptable to the Muslim community as it was against the Constitution. 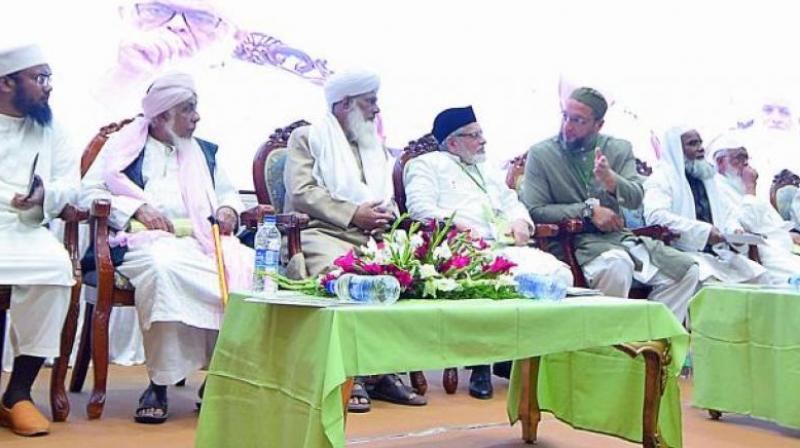 Members of All India Muslim Personal Law Board during the second day of its meeting on triple talaq issue Saturday. (Photo: File)

Hyderabad: The All India Muslim Personal Law Board on Sunday expelled one of its members, Maulana Syed Salman Hussain Nadvi a day after he said that the mosque can be shifted once built.

The Muslim law board reiterated its earlier stand on the Babri Masjid issue and said that the mosque cannot be sold, gifted or shifted.

"Babri Masjid is an essential part of faith in Islam and Muslims can never abdicate the masjid nor they can exchange land for masijd, gift masjid land. Babri masjid is a masjid and it will remain a masjid till eternity. By demolitioning it never loses its identity," it said.

The struggle of re-construction of Babri Masjid continues and that the appeal of the Supreme Court is being fought rigorously, the board further said.

Nadvi, an executive member of the AIMPLB, who met Art of Living founder Sri Sri Ravi Shankar earlier this week, extended support for construction of the Ram temple at the disputed site in Ayodhya. He said that an alternate piece of land should be offered for the construction of a mosque. He also added that a university can also be built at that place.

Art Of Living (AOL) founder Sri Sri Ravi Shankar had held a meeting in Bengaluru with Muslim leaders including members from the AIMPLB and the Sunni Waqf Board on February 8.

After the meeting, the AOL had said some eminent members of the Sunni Waqf Board, the AIMPLB and others met Ravi Shankar and expressed support for an out-of-court settlement of the Ayodhya dispute and "supported the proposal of shifting the Masjid outside to another place".

The AIMPLB earlier on Saturday said there is no change in its stand on the Ayodhya issue as "once a masjid is built, till eternity that will be a masjid".

"About Babri masjid, it was clearly said that once a masjid is built, till eternity that will be a masjid. There will be no compromise. As far as the Babri masjid is

concerned, the people who compromise on the masjid issue will be answerable to the Almighty," AIMIM president and Hyderabad MP Asaduddin Owaisi said.

He also said that the triple talaq bill which is now pending in the Rajya Sabha was not acceptable to the Muslim community as it was against the Constitution.

"It is against the constitutional provisions which were given to the minorities," he said.

The 26th plenary meeting of the board is underway in Hyderabad since Friday.