The distance between Mettupalayam at the foothills of Nilgirism from where the NMR starts, and Ooty the final destination, is 46 km. 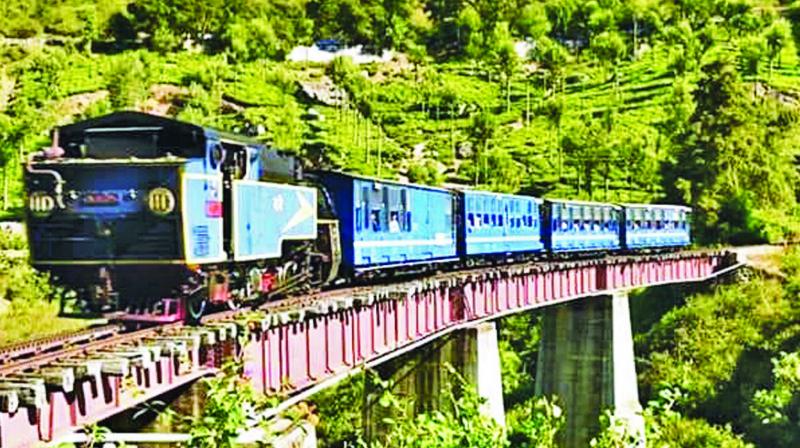 NMR chugging along the scenic route in Ooty. (Photo: AGE)

Ooty: The Nilgiri Tribal Solidarity (TNTS) has written to Prime Minister Narendra Modi urging him to focus on Nilgiri Mountain Railway (NMR) for its resurgence,  to make it self-sustaining, offer regular up and down trips between Ooty and Mettupalayam  and to use the technological advancements to raise the bar of NMR.

Explaining the details on letter sent to the Prime Minister and the suggestions made by the TNTS for NMR's "rebirth", Prof,T.M. Kullan, the president of TNTS, said that the present state of affairs of the  111-year-old NMR despite accolades from Unesco,  is an abysmal scenario.   NMR is an 'engineering marvel and prowess'.    In short, an element of "Institutions integrity" is felt in this "Magnified Built-up". Everything on rail, including the alternate biting teeth of the "Lock and Pinion" system remains the uniqueness behind the NMR.

At present, the NMR is considered to be a strategic one, according to which the annual loss incurred by the NMR is being reimbursed from the Finance ministry.  It shows, NMR is merely a carnival show now.  By exploring ways to fight-off the "midlife health crisis" of NMR with a simple work-style changes, it will feel "healthy, look younger and serve without any hassle towards the Indian national financial augmentation," he said.

The NMR has only one trip between Mettupalayam and Ooty in the top hill.  It begins its ascending trip by 7.15 am. picking up passengers from Nilgiri express and reaching Ooty at 12.15 pm  The NMR returns from  Ooty to Mettupalayam by 2 pm taking  long hours to connect to Nilgiri express. Thus, the NMR is constructed as strategic railway. Prof Kullan pleaded, "time has now come to think about a positive, tangible, lightening, marvelous solution and remedy to patronize NMR for a glorious future, aiming at a national resurgence in India's financial stability on the NMR's count.