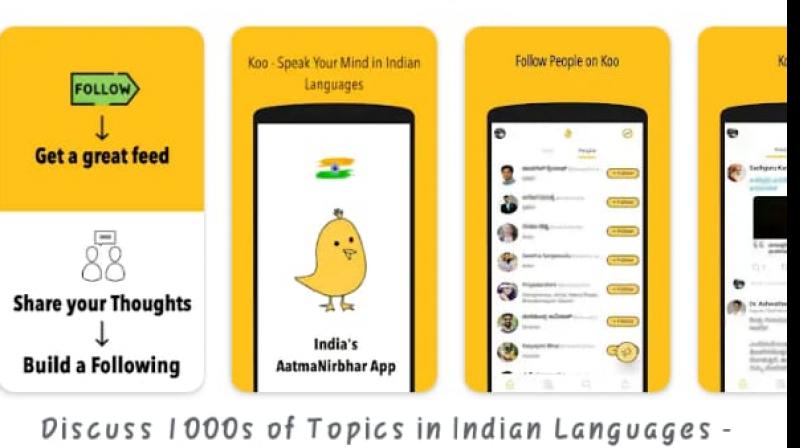 A scree capture of the migro-blogging app, Koo

New Delhi: Koo has in the last few weeks seen a massive surge in user base as Union ministers and government departments have endorsed the homegrown microblogging platform amid a spat with Twitter.

From information technology ministry using Koo to broadcast its stand on Twitter not fully complying with its order to take down inflammatory content to ministers, including Piyush Goyal, urging people to switch platform, these developments have led to a surge in the userbase of the Indian rival.

Koo, which has startling similarities with Twitter, now has over three million users. Downloads of Koo app surged 10-fold this week. Koo has a yellow bird as its logo in contrast to the blue bird of Twitter.

Twitter has 17.5 million users and is ardently used by Prime Minister Narendra Modi and his Cabinet ministers to communicate with the public.

Interestingly, Koo co-founder Aprameya Radhakrishna took to Twitter to highlight the rising popularity of the platform and tweeted, "Our systems are facing more load than ever. Thank you for placing your trust in us. Our team is working on overdrive to fix it".

Koo, founded by Aprameya Radhakrishna and Mayank Bidawatka, was launched last year to allow users to express themselves and engage on the platform in Indian languages. It supports multiple languages including Hindi, Telugu and Bengali, among others.

Last week, Koo -- which is backed by former Infosys executive TV Mohandas Pai -- had raised USD 4.1 million in series A funding from Accel, Kalaari Capital, Blume Ventures and Dream Incubator, and 3one4 Capital. It was also one of the winners of the Aatmanirbhar Innovation Challenge introduced by the government last year.

The company is also strongly positioning the app as part of India's self-reliant journey, as it rides on the growing sentiments for indigenous products and services.

"Koo is an India registered company with Indian founders. Raised earlier capital 2.5 years ago. Latest funds for Bombinate Technologies is led by a truly Indian investor 3one4 capital. Shunwei (single digit shareholder) which had invested in our Vokal journey will be exiting fully," Radhakrishna tweeted.

The duo had launched online vernacular question and answer platform Vokal in 2017.

That said, Koo's platform has a similar look and feel to Twitter, including the user interface. When it comes to the logo, Koo has a yellow bird as its mascot while Twitter has blue-coloured 'Larry' (inspired by popular basketball player, Larry Bird) representing the brand. A significant strength for Koo, however, is allowing users to post content in multiple Indian languages.

While ministers and government departments have been leveraging social media platforms like Twitter and Facebook, there have been calls for homegrown platforms to emerge in this space, and apps like Koo could be likely beneficiaries.

Minister of Railways, Commerce and Industry Piyush Goyal on Tuesday tweeted that he was on Koo and asked people to connect with him.

"I am now on Koo. Connect with me on this Indian micro-blogging platform for real-time, exciting and exclusive updates. Let us exchange our thoughts and ideas on Koo," he had said. Goyal has already garnered over 91,800 followers on Koo.

Later, Madhya Pradesh Chief Minister Shivraj Singh Chouhan also tweeted about his presence on Koo. He now has over 33,000 followers.

IT Minister Ravi Shankar Prasad (over 5 lakh followers), Minister of State for Chemicals and Fertilisers Mansukh Mandaviya (over 23,000) and Minister of Animal Husbandry, Dairying and Fisheries Giriraj Singh (over 7,800 followers) are also present on Koo.

The number of followers of these personalities has been soaring indicating the rising popularity of Koo.

"It (Koo) appears to be a promising social media and I hope this will meet the objectives of both an individual and an enterprise. I am happy to inform that NIXI is present on Koo and would like to inform all our stakeholders including customers that you will continue to get latest information about NIXI on Koo platform," he said in a statement on Thursday.