Initial investigations reveal that CNG leak at the back of their Datsun Go car led to the fire. 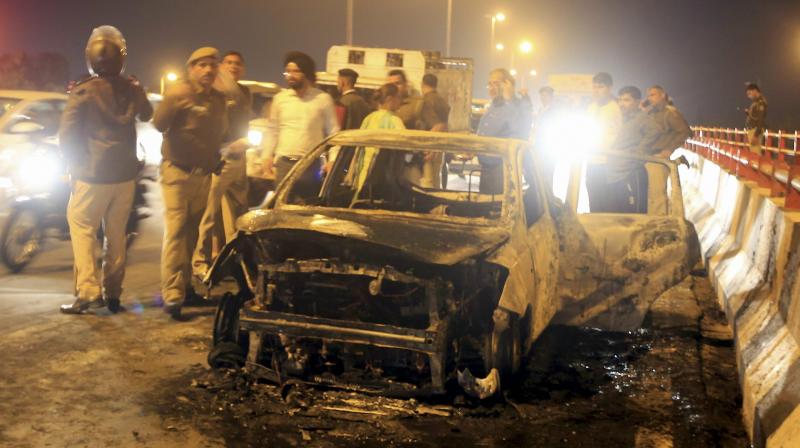 Police and people stand near a charred car which caught fire near Akshardham in New Delhi. (Photo: PTI)

New Delhi: A 35-year-old woman and two of her daughters were burnt to death after the car they were travelling in burst into flames at east Delhi’s Akshardham flyover on Saturday.

The incident took place around 6:30 pm when the car was going towards the temple. Initial investigations reveal that CNG leak at the back of their Datsun Go car led to the fire.

The victims were Ranjana Mishra and her daughters Ridhi and Nikki. Her husband and a third daughter survived the blaze.

As the fire spread, Rajana Mishra's husband Upender Mishra, who was driving, managed to get out of the car quickly with one daughter in the front seat. The bodies of his wife and the other two daughters in the back seat were charred beyond recognition.

Fire officials said the rear doors may have been locked.

"We will conduct further investigations to figure out the cause. The husband is in a state of shock", Deputy Commissioners of Police (East) Jasmeet Singh said.

“In the time, he slowly moved towards the footpath to stop the car. More than half of it had been engulfed in the fire. The man jumped out and pulled out his daughter who was sitting next to him in the front. Other commuters passing by tried to unlock or break open the rear door but failed. We feared that the car may explode and maintained a safe distance,” said an eyewitness.

Mishra said he doesn't know what happened and how the car caught fire.

“People held him back else he too would have died in the fire. He was crying loud and was screaming for help. However, the heat was so much that none of us could even stand close to the vehicle,” said Karan Sarkar, another witness to the incident.