BJP MP Nishikant Dubey referred to the influx of large number of 'illegal' people to India from countries like Bangladesh. 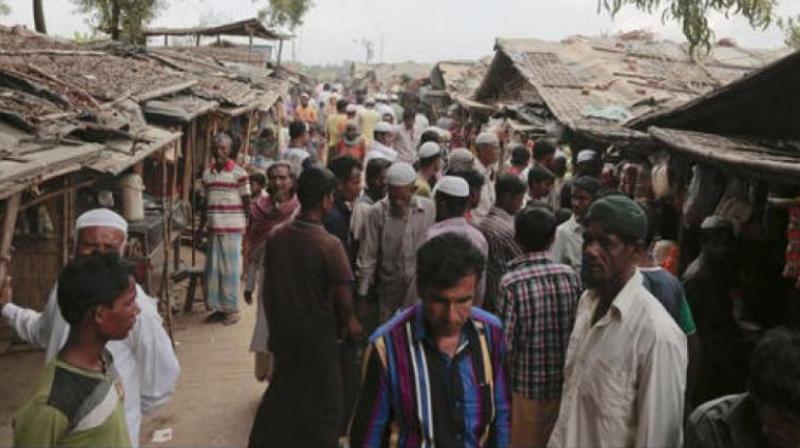 Government sources have said that there are 5,817 registered Rohingya and Bangladeshi nationals often referred to as ‘Bihari Muslims’ in Jammu region. (Photo: AFP)

New Delhi: A demand by a Bharatiya Janata Party (BJP) MP to deport a large number of illegal immigrants from India alleging they were involved in anti-social and terror activities on Tuesday triggered uproarious scenes in Lok Sabha.

Raising the issue during the Zero Hour, BJP MP Nishikant Dubey referred to the influx of large number of "illegal" people to India from countries like Bangladesh and demanded setting up of a commission to identify the areas and examine the demographic changes there.

Dubey said the illegal immigrants were involved in various terror-related activities and impacting the livelihood of people across the country, including the North East.

A number of Opposition MPs strongly opposed Dubey's comments and even said that such action will go against India's age-old humanitarian approach towards refugees.

Dubey said using Aadhaar card, some of these people were staying illegally in the country and trying to obtain citizenship, which was a matter of serious concern.

He said the National Population Registrar should be linked with Aadhaar database to identify illegal immigrants so that they can be deported to the country of their origin.

Opposing the BJP MP's demand, Congress leader Shashi Tharoor said India has been welcoming refugees from across the world and alleged that disinformation campaign was being run against thousands of "defenceless" people, based on "unverifiable charges".

Tharoor even said he had requested the Home Minister to come out with a refugee policy as several countries have such policies.

CPI(M) MP A Sampath referred to the Ministry of External Affairs extending a grant of USD 1 million for the rehabilitation of Rohingiya refugees from Myanmar.

It is a sensitive issue. Even the UN is involved in it, he said.

In his remarks, Dubey had sought formation of a commission to identify the districts across the country which witnessed demographic changes due to the influx of illegal migrants.