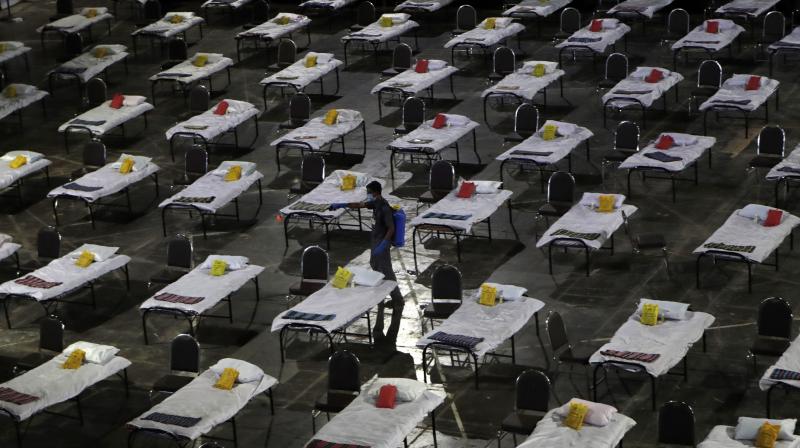 A civic worker sprays disinfectant on beds at a special temporary hospital facility for COVID-19 patients in Mumbai on April 10, 2020. (AP)

New Delhi: Over 945 new positive cases of Covid-19 were recorded across the country in the last 24 hours, the highest one-day jump so far. Friday was the 17th day of the nationwide lockdown, and the number of fresh cases continued to rise sharply.

However, the Union Health Ministry continued to deny that the virus has reached Stage III of community transmission in India.

“It is a cause of concern that cases are going up. An infectious disease is like a chain reaction — one person infects 4, they infect 8 and so on… We need to break the chain of transmission. While we should be concerned about the rising number of cases, we should also see if social distancing is being followed properly,” a senior official of the health ministry said.

He added that in some areas the number of cases is increasing because proper contact tracing has not been done.

Officials, however, insist that the rate of infection is not huge given that 1.45 lakh samples have been tested so far, out of which 16,000 were done on Thursday.

Incidentally, a study conducted by the Indian Council of Medical Research (ICMR) in 52 districts across 20 states said that Covid-19 infection was detected even among those respiratory illness patients who have no travel history or contact with such positive persons.

The study,  conducted between February 15 and April 2 with a sample size of 5,911, said 104 people (1.8 per cent) were found to have contracted coronavirus out which 40 (39.2 per cent) did not have any recent international travel history or contact with any positive case of the infection.

However, an ICMR official said that these positive cases among severe acute respiratory illness (SARI) patients were detected from areas where already positive cases were prevalent and not from areas where no cases were detected. The ICMR added that now with its new strategy of testing all persons with cold, cough and fever symptoms in hotspots and containment zones, more people may test positive.

Out of these 16,002 samples were tested on Thursday, of which 575 cases were positive.

“We have substantially increased testing now to cover as much suspect cases as possible,” the official said. The ICMR has also approved use of diagnostic machine used for drug-resistant TB for Covid-19 testing.