And over in Bhopal, of the 117 confirmed cases reported so far, 61 are health officials and 12 are cops 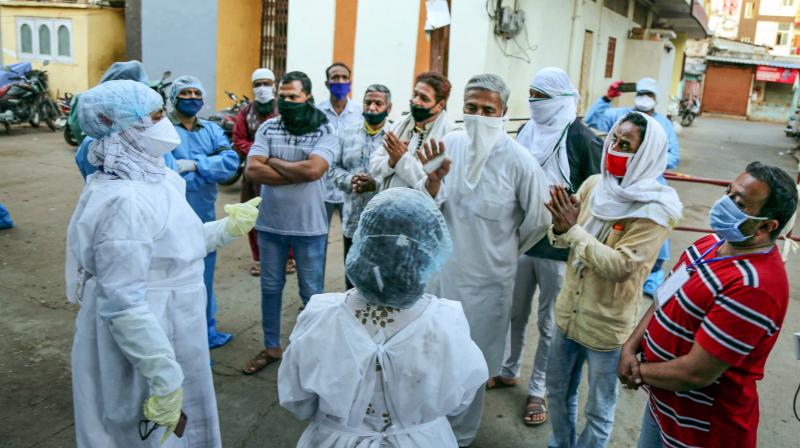 Indore was where health personnel were attacked while doing a survey last week. Here, residents of the Taat Patti Bakhal locality apologize to a team of doctors a day after health workers were attacked by some local people. (PTI)

Bhopal: Madhya Pradesh’s coronavirus hotspot Indore has witnessed the death of a second doctor due to Covid-19 in the last 24 hours.

He was the second doctor in the state as well as in the country to succumb to the virus.

On Thursday, 62-year-old Satrughna Panjwani, a medical practitioner, died of Covid-19 in Indore.

Dr Chouhan, who took up private practice after his retirement from government service, tested positive for Covid-19 a couple of days ago and was immediately admitted in hospital.

“He had no travel history. He might have contracted the virus during treatment of coronavirus patients,” chief medical and health officer Pravin Jadia said.

Dr Chouhan was among four people who died of Covid-19 in Indore on Friday, taking the toll in Indore an alarming 27, the second highest among cities in the country after Mumbai, where 45 Covid-19 patients have died so far.

The fresh deaths have increased the toll in Madhya Pradesh to 37, which is also second highest in the country after Maharashtra which recorded 97 deaths so far.

In another development, another doctor in Bhopal tested positive for coronavirus on Friday, taking the tally of doctors contracting the virus to three in the capital city.

Of the 117 confirmed cases reported in Bhopal so far, 61 are health officials and 12 are cops.

Besides the doctor, 21 others including the two-year-old son and 62-year-old mother of a policeman tested positive for coronavirus in Bhopal on Friday.