India   All India  11 Apr 2020  Tamil Nadu's decision on lockdown only after consulting PM
India, All India

Tamil Nadu's decision on lockdown only after consulting PM

No spread of the disease from any new outside cluster, says Chief Secretary 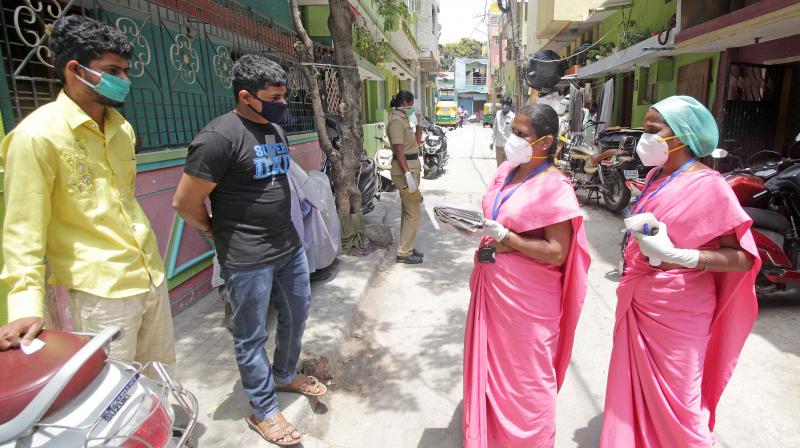 ASHA workers during a door to door survey, to screen people from Covid19 symptoms. PTI Photo

Chennai: A jumbo panel of medical experts have suggested to the Tamil Nadu Chief Minister, Mr. Edappadi K Palaniswami to extend the lockdown, to fight Covid-19, by 15 days beyond April 14. But a final decision will be taken by Palaniswami only after consultations with Prime Minister, Mr. Narendra Modi, followed by a cabinet meeting on Saturday.

The medical experts including domain specialists on infectious diseases and from ICMR and government and private sector doctors, at an over three-hour meeting with Mr. Palaniswami is learnt to have clearly told him that Tamil Nadu should consider lifting the lockdown only it was "sure" that the new coronavirus spread has been brought under control; or else, the purpose of the steps taken so far like the lockdown, the Containment Plan (CP) and observing social distance could be defeated, they cautioned.

The Chief Secretary, Dr K Shanmugam, briefing reporters here on Friday evening at the DMS complex, where the State Health Secretary, Dr. Beela Rajesh was also present, did not divulge the details of the above meeting, but said the medical experts general advice was unless the Covid-19 spread was brought under control, the measures taken thus far may go waste.

Dr Shanmugam said, the Chief Minister will take a final call on the lockdown issue after his scheduled video conference with Mr. Modi on Saturday and which is to be followed by a meeting of the State Cabinet here and then announce the final decision.

On the overall situation in the State, he said while the total positive cases for the virus has shot up to 911 by Friday evening, with 77 new positive cases reported today alone, an elderly woman patient died in the coronavirus ward in Thoothukudi government hospital, taking the total virus death toll to nine.

However, he said of the 77 new positive cases today, five of them had a contact history with 'primary persons' who had travelled from abroad, while the remaining 72 had contacts with those five persons.

All these people who have tested positive today were from the group of people either already in government quarantines or who were isolated and under house quarantine under the  massive CP that was going on in the State. "So, there is no spread of the virus from any new outside source," he said, to drive home that Tamil Nadu was still in Stage-II of the disease.

Dr. Shanmugam saw this as a ray of hope in Tamil Nadu quickly getting over the situation and bringing the virus spread under total control. The Chief Minister wants to rigourise the CP, to not only test all the family members of any patient testing positive for Covid-19, but also screen all their contacts, and isolate and quarantine those who have symptoms.

Dr Shanmugam expressed the hope that this "aggressive containment plan" should be completed by the next two or three days and once those numbers are known, it will "help us to bring the virus-spread under control soon." The public should continue to cooperate with the State, he added.

Asked about the delay in the Rapid Test Kits (RTK) imported from China, in reaching Chennai, he said the delay by a day or two was due to those imports being sourced through the Central government. But Tamil Nadu was also directly sourcing RTKs', other equipment and Personal Protection Equipment (PPE) kits for frontline medical and sanitary staff on its own, that "we are well prepared". Tamil Nadu began readying itself to combat Covid-19 by beginning to source all these equipment from January-end itself when the first breakout from China was reported, he explained.

At the same time, Chief Minister Mr. Palaniswami was focusing on minimizing the economic hardships due to the lockdown with all the cash assistance and free supply of essentials through PDS, he said. The cash dole of Rs. 1,000 was on Thursday extended to cover another 8.50 lakh families including workers of registered fire crackers units, he noted. The needs of the unorganised sector including over three lakh migrant workers from other States, the disabled and the elderly were also taken care of.

GOI MONEY: On financial assistance from the Centre for Covid-19 containment activities, Dr Shanmugam said apart from the Rs. 510 crore initially sanctioned to Tamil Nadu from the SDRF funds, on Friday, the Centre has released another Rs. 314 crore to the State from the National Health Mission (NHM) funds for fighting Covid-19 pandemic. But the State government was also mobilizing resources on its own and spending a lot of money on medical needs and various welfare schemes, he pointed out.