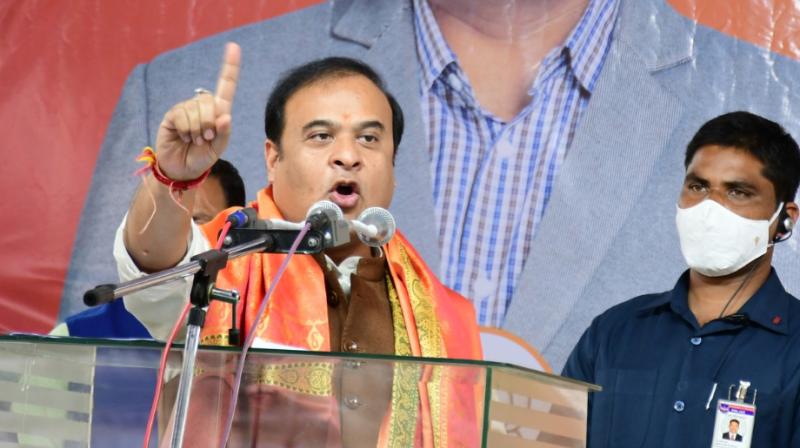 Assam chief minister Himanta Biswa Sarma clarified that there is no instruction from the Centre to make Hindi learning compulsory. (DC)

Guwahati: The Centre’s plans to make Hindi a compulsory language in schools up to Class 10 across states has triggered angry reactions among many organisations, including Asom Sahitya Sabha, an influential literary body opposing the idea and asking the central government to concentrate on conserving and promoting indigenous languages.

However, Assam education minister Ranoj Pegu supported the move saying that lack of Hindi knowledge in the state has become a challenge for the people of Assam to find jobs in Hindi speaking states. Mr Pegu said, “Learning a language is a skill and it is equally as important as getting a degree or certificate. Job seekers from Assam are lacking in this skill, thus they are unable to find suitable jobs in states like Madhya Pradesh, Uttar Pradesh, Delhi, Gujarat etc. Only opting for fourth-grade jobs in south India will not make our youths successful.”

Describing Hindi as “the language of India”, the Union home minister Amit Shah had recently said that Hindi will be made a compulsory subject up to Class 10 in all schools in the north-east region. He also said 22,000 teachers have been recruited to teach Hindi in the north-eastern states.

The remark of the Union home minister was opposed in most of the northeastern states. Asom Sahitya Sabha secretary-general Jadav Chandra Sharma in a statement said: “If Hindi is made compulsory, the future of indigenous languages and Assamese as a link language will be endangered.”

The chairperson of the North-East Students’ Organisation, Samuel B. Jyrwa, said: “We have no objection to Hindi as an optional subject but this is a kind of imposition. We oppose this move, Hindi can be an optional subject.” He said that in Meghalaya, besides the local language, English is the preferred medium of instruction. “We will approach all the state governments in the region to not make Hindi compulsory,” he said.

Congress leader Ampareen Lyngdoh, who was suspended from the party recently, said the Khasi and Garo-speaking states cannot allow Hindi to be imposed. “The Sixth Schedule of the Constitution gives us the protection against any kind of imposition,” she said.

In Mizoram, the influential Young Mizo Association has also opposed the move. Likewise, in Assam, the Krishak Mukti Sangram Samiti has condemned the move as “anti-democracy, anti-constitution” and against the federal structure of the country.

Regional political parties such as Raijor Dal and Assam Jatiya Parishad have also panned the Centre’s move as a bid to give Hindi-speakers the economic, academic and administrative edge and let them control the non-Hindi speaking regions of the country in the long run.

He added: “The Assam government, in consultation with the Assam Sahitya Sabha and Tribal Sahitya, prepared a language policy where a student will learn Assamese and a tribal language besides English and Hindi. Bodo Sahitya Sabha has some objections and that is why we have not announced the policy yet.”