India   All India  11 May 2017  Kapil Mishra accuses AAP of spreading lies over attack
India, All India

Yesterday, ruckus ensued at Mishra's protest site after Bhardwaj stormed in and attempted to assault him. 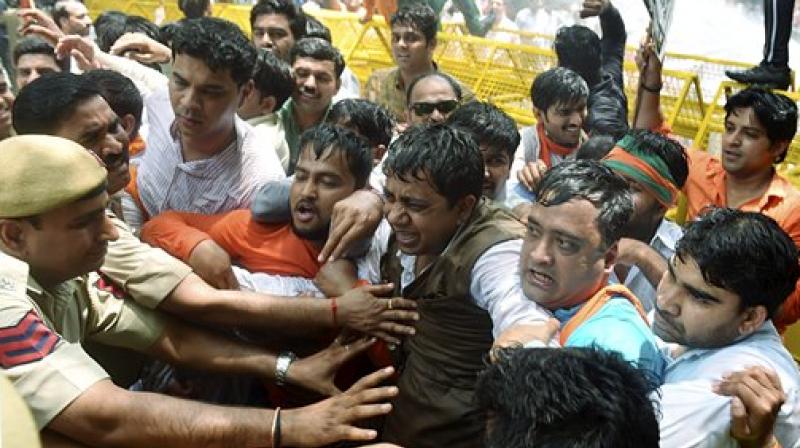 Members of the BJP's youth wing protest outside Kejriwal's residence demanding his resignation after sacked minister Mishra levelled serious allegations against him, in New Delhi on Tuesday. (Photo: PTI)

New Delhi: Sacked Delhi minister Kapil Mishra on Thursday alleged the AAP was spreading 'falsehoods' that the man who tried to assualt him at his protest belonged to the BJP's youth wing.

Mishra, on the third day of his 'indefinite fast', penned another letter to Chief Minister Arvind Kejriwal, alleging that the attacker, Ankit Bhardwaj, was attached with the mohalla clinics project under Health Minister Satyendar Jain.

In the letter, Mishra claimed that the way AAP leaders and volunteers were quick to brand Bhardwaj as a BJP worker aroused suspicion that the entire episode was scripted "like the past attacks on you (Kejriwal)".

"The way Facebook photos were shared and statements were made, it reminded me that the same used to happen whenever there were attacks on you in the past. Is it an old trick?" he asked.

Yesterday, ruckus ensued at Mishra's protest site after Bhardwaj stormed in and attempted to assault him. Police officials and his aides caught hold of Bhardwaj.
Within minutes, the AAP's social media volunteers started sharing snapshots of a Facebook profile which they claimed established that the attacker was a BJP youth wing worker and Mishra had staged it to gain sympathy.

However, the Bharatiya Janata Yuva Morcha (BJYM), the youth wing, also denied having any link with him.

"Even before the police could take him away, (AAP leader) Sanjay Singh made a statement declaring him to be a BJP worker. It was almost as if the party was waiting for something like this to happen," Mishra wrote.

After his removal as a minister and suspension from the party, Mishra launched a fast demanding that the AAP divulge details of foreign tours undertaken by five leaders of the party which, in turn, has accused him of following a script penned by the BJP.

On Sunday, he kicked up a storm when he said he'd seen Kejriwal 'accept Rs 2 crore in cash' from Jain. He has submitted three complaints to the CBI on these alleged
instances of graft.

"If I would have done something wrong, I would have observed everything from the hiding, like you. People around you, guards, drivers are revealing the truth. Government officials are sending information to me," Mishra claimed.