India   All India  11 May 2018  Conmen held for seeking Rs 1 Cr from Unnao rape accused’s wife to get case dropped
India, All India 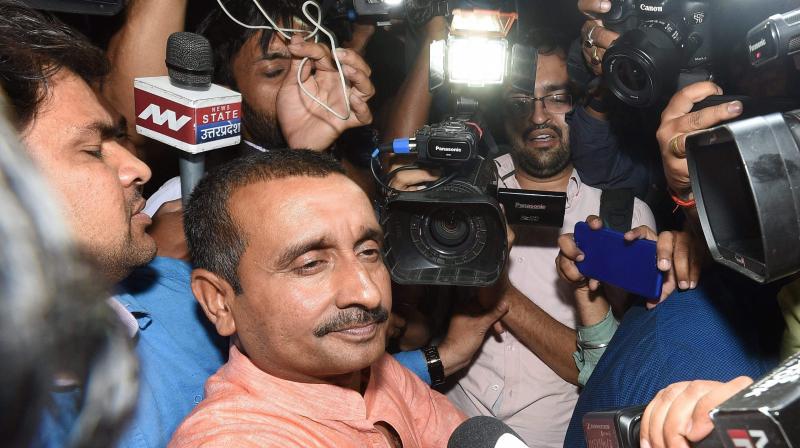 Uttar Pradesh BJP MLA Kuldeep Singh Sengar was arrested by the CBI on April 13 after a girl accused him of raping her last year. (Photo: File | PTI)

Lucknow: Two men posing as a Bharatiya Janata Party (BJP) leader and a Central Bureau of Investigation (CBI) officer were arrested on Thursday after they allegedly demanded Rs 1 crore from the wife of Unnao rape accused BJP MLA Kuldeep Singh Sengar to get the case against him dropped.

According to Hindustan Times report, the police identified the two as Alok and Vijay, both residents of Lucknow.

Kuldeep Singh Sengar, MLA from Bangarmanu in Unnao district, was arrested by the CBI on April 13 after a 17-year-old girl accused him of raping her in 2017.

“Two people have been arrested for demanding Rs 1 crore from Sangeeta Singh, wife of Kuldeep Singh Sengar. They were offering to secure release of the MLA from custody,” said Deepak Kumar, SSP, Lucknow.

Sangeeta, who stays in Indira Nagar, Lucknow, received a phone call on May 5 from an unidentified number. The caller introduced himself as a BJP leader and offered to secure the release of her husband. He demanded Rs 1 crore to bribe CBI officials.

When Sangeeta said it would not be possible to get Rs 1 crore, the caller asked her to arrange Rs 50 lakh instead, police said.

The next day, she got a call from another number and the caller introduced himself as CBI officer Rajeev Mishra. He also offered assistance to secure Sengar’s release.

The caller asked Sangeeta to report to the CBI’s Lucknow office on May 7 to hand over the money. Sangeeta then informed her relatives about the phone calls.

They got suspicious and informed the Ghazipur police station in Lucknow about the phone calls. On Thursday, police arrested Alok and Vijay with after tracking down the phone calls.