Nations having financial dealings with Iran are expected to be hit by comprehensive sanctions regime said Trump administration. 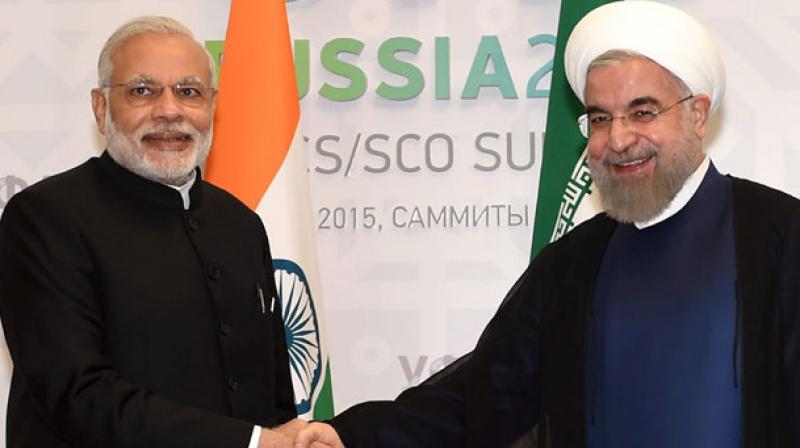 In February, Iranian President Hassan Rouhani visited India during which both sides agreed to further expand their cooperation in number of key sectors. (Photo: File | PTI)

New Delhi: India on Thursday said it will take necessary measures to offset any adverse impact on its interests due to US President Donald Trump's decision to dump the Iran nuclear deal.

External Affairs Ministry Spokesperson Raveesh Kumar said India was closely monitoring the situation arising out of Trump's announcement to pull the US out of the Iran deal.

"We are closely monitoring the developments. We are assessing the implications which it might have on our interests," he said, adding it was too early to analyse implications of the US decision on India.

There have been apprehensions that the US decision may adversely impact New Delhi's oil import from the Persian Gulf nation as well as Chabahar port project.

Iran is the third largest supplier of crude oil to India after Saudi Arabia and Iraq.

Countries having financial dealings with Iran are expected to be hit by the comprehensive sanctions regime announced by the Trump administration after withdrawal from the nuclear deal.

"The government will take all necessary measures which are required to safeguard our interests," said the MEA spokesperson.

Asked whether the US sanctions will hit the Chabahar port project, Kumar said it was too early to analyse and come up with conclusions about implications of US withdrawal from the nuclear deal.

Trump on Tuesday announced that the US was withdrawing from the Iran nuclear deal signed by the Obama administration in 2015 under which Tehran had agreed to limit its sensitive nuclear activities and allow in international inspectors in return for the lifting of crippling economic sanctions.

Iran had struck the JCPoA (Joint Comprehensive Plan of Action) deal with the US, the UK, Russia, China, France and Germany after years of negotiations.

On Wednesday, India had said that all the parties concerned should engage constructively to resolve the Iranian nuclear issue peacefully.

Indo-Iran ties have been on a upswing after Tehran sealed the nuclear deal with the international community in 2015.

Prime Minister Narendra Modi had visited Tehran in May 2016 with an aim to craft a strategic relationship with Iran and expand India's ties with West Asia.

During the visit, India and Iran signed nearly a dozen pacts, centrepiece of which was an agreement on development of Chabahar port.

Later, India, Iran and Afghanistan signed a trilateral pact providing for transport of goods among the three countries through the port.

In February, Iranian President Hassan Rouhani visited India during which both sides agreed to further expand their cooperation in number of key sectors.

During Rouhani's visit, both sides signed nine agreements including one on handing over Chabahar port's operation to India for 18 months.

India and Iran have robust economic and commercial ties covering many sectors though it has traditionally been dominated by the import of Iranian crude oil by India.