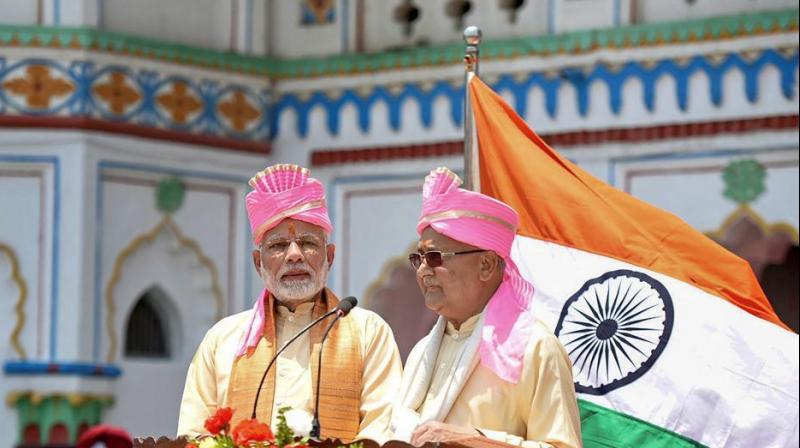 Speaking at a civic reception by the Janakpur Sub-Metropolitan City at Barhabigha ground in Janakpur, Modi briefly spoke in Nepali and Maithili. He began his address by chanting 'Jay Siya Ram' slogan three times. (Photo: PTI)

Janakpur/ New Delhi: Prime Minister Narendra Modi on Friday assured Nepal that it is at the top of India's Neighbourhood First policy as he announced Rs 100 crore package to develop Janakpur - the sacred city for Hindus - while invoking mythological links between the two countries.

Speaking at a civic reception by the Janakpur Sub-Metropolitan City at Barhabigha ground in Janakpur, Modi briefly spoke in Nepali and Maithili. He began his address by chanting "Jay Siya Ram" slogan three times.

In a speech that invoked mythological references and symbolism, Modi said he has come to Janakpur not as the Prime Minister but as the chief pilgrim, amid applause. Modi, who is on his third visit to Nepal since assuming office in 2014, read out a verse from Ramcharitmanas which says 'one cannot remain isolated from the suffering of a friend and a true friend always helps his friend in the time of suffering.'

"Whenever there has been a problem, India and Nepal have stood together. We have been there for each other in the most difficult of times," said Modi, whose voice appeared hoarse apparently due to his hectic campaign in Karnataka assembly elections.

Modi assured Nepal that it is at the top of India's Neighbourhood First policy. He announced a Rs 100 crore package for the development of Janakpur and its surrounding areas. The amount will be spent on different development projects forging collaboration between the central government and the local government of Province No 2.

Janakpur is known as the birth place of Sita, the wife of Lord Rama. Modi, who earlier with his Nepalese counterpart K P Sharma Oli jointly inaugurated a direct bus service between Janakpur and Ayodhya - the two sacred cities for Hindus, said he was happy to link Janakpur with Ramayan Circuit.

"This circuit will develop religious tourism. It also will strengthen connectivity between the two nations," Modi said. He also announced that two other circuits will also be developed for the promotion of the areas related to Buddhism and Jain religion in both Nepal and India, which will be instrumental in generating employment for the youths.

Modi said Nepal and India can benefit if they cooperate and work together for the promotion of five Ts: Tradition, Trade, Tourism, Technology and Transport. He underlined the need for linking Nepal and India through highway, I- way or Information, Railway, Trans way or electric connectivity, waterway and airway.

"We are also trying our best to connect Nepal with waterways so that Nepal will be able to export Nepali goods abroad. If done so Nepal will be able to reap benefits through international trade," Modi said. He said his long cherished dream to visit Janakpur has now been fulfilled with the grace of Goddess Sita.

Modi, who earlier offered special prayers at the famed 20th century Janaki temple, invoked mythological King Janak of Mithila and King Dashratha of Ayodhya and said they not only united Janakpur and Ayodhya but also united India and Nepal.

"Nepal and India relations were started during the rule of King Janak in Treta Yuga and the bondage built by Sita during the period is still strong. It is this bondage which attracts people from Rameswaram to Pashupatinath, people from Lumbini to Bodhgaya and I was also attracted with the same bondage," he said.

He said Nepal and India not only share border, aspirations, dreams and destination, but their happiness and challenge are also same.

"Nepal is the land of great sages like Yagyavalkya, Astavakra, Gargi, who used to debate on theology and social issues in the palace of King Janak," he said, adding that Nepal has become the centre of spiritualism and philosophy.

Modi said India will build a railway link between Raxaul in Bihar and Kathmandu to facilitate people-to-people contact and movement of goods. He also thanked Oli and said the honour he received in Janakpur is for the entire people of India.

Defence Minister Ishwor Pokharel welcomed Prime Minister Modi at the function. Modi was wearing a Maithili kurta gifted by Prime Minister Oli. "Nepal and India are tied together by common culture, civilization and history," Pokharel said. He expressed the confidence that the people to people relations between the two countries are being nurtured on the basis of brotherhood and equality.

Mayor of Janakpur Sub-metropolitan City Lal Kishro Shah read out felicitation letter in honour of Modi. He also handed over the symbolic key of Janakpur to Modi and gifted the picture of Janaki Temple as a token of love to him.

Chief Minister of Province No. 2 Lal Babu Raut offered a huge garland weighing 121 kg to Modi on the occasion. Welcoming Modi, Chief Minister Raut said the "open borders between Nepal and India have been instrumental in connecting the peoples of the two countries."

He stressed on the need for linking the peoples of the Janakpur and India by establishing connectivity through air route, railway line and roads.