India   All India  11 May 2020  The accent is on economy as PM interacts with CMs on Covid situation
India, All India

Meeting comes at a crucial juncture: Covid-19 yet to peak but economy already down in the dumps 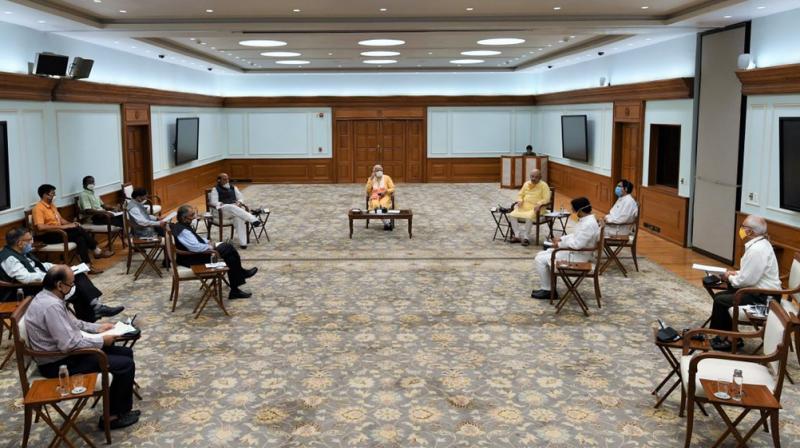 File photo of PM Narendra Modi in a meeting with the National Disaster Management Agency (NDMA) earlier this week. (Twitter).

New Delhi: Prime minister Narendra Modi on Monday chaired another video consultation with chief ministers with the COVID-19 pandemic tipped to peak no earlier than mid-June and the economy already down at heel.

Going into the meeting, the stress clearly was on easing lockdown restrictions while not allowing the contagion to spread, a herculean task given that large-scale movement of migrant workers from urban to rural India is likely to spread the epidenic to new places.

This was the fifth virtual interaction between the prime minister and chief ministers since the outbreak of the deadly virus in the country.

Among the participating chief ministers, the emphasis is distinctly economic. At an analogous meeting Sunday with cabinet secretary Rajiv Gauba, state chief secretaries told him, according to an official statement, that "while protection is required from COVID-19, economic activities also need to be stepped up in a calibrated manner."

Especially the movement of thousands of migrant workers on trains, buses and on foot, is likely to prove a double-edged sword: the contagion spreads where they go, and industry and business will slacken where they leave. While several states have made relaxations to their labour laws to increase factory output, it is not nearly enough.

Also proving that the accent is now on the economy rather than merely the coronavirus epidemic, the railways has decided to operate 15 air-conditioned special trains from May 12 in a gradual resumption of passenger services.

Modi's discussions with chief ministers of states and union territories on Monday are expected to revolve on steps for reviving the battered economy and scaling up all efforts to bring more 'red' zones with high COVID-19 case load into 'orange' or 'green' zones, as they push for stepping up economic activities in a calibrated manner.