The MP rejected the allegation that no BJP leader visited the families of farmers killed during the agitation. 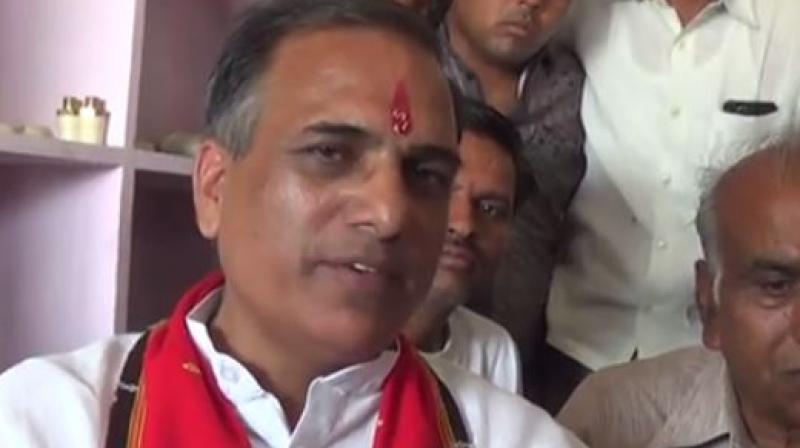 Mandsaur (MP): With peace gradually returning to violence-hit Mandsaur, local BJP MP Sudhir Gupta on Sunday alleged that the Congress provoked the farmers to resort to violence and said the farmers' stir was led by the opposition party.

The Neemuch-Mandsaur MP alleged that the Congress organised this stir to divert people's attention from the recent public slaughter of a cow by Youth Congress leaders in Kerala.

When asked if his party will suffer in the elections as most of the people here are farmers, Gupta said when the truth about the Congress' role in agitation will come out, then Congress will have to face loss.

"India is a democratic country and the farmers have all the rights to raise their demands but no one can imagine that farmers of Malwa region, which is very peaceful, on the name of agitation, would do so much violence," he said in an apparent reference to the Congress.

Over the Congress alleging that no BJP leader visited the families of farmers killed during the agitation, the MP rejected the allegation saying he is in touch with the farmers' families.

"When the bodies of the five farmers killed in police firing were brought to a hospital here, I sat with them for over five hours," Gupta said.

Senior Congress leader and former MP Meenakshi Natarajan denied the allegation that the Congress provoked the farmers to resort to violence.

"Congress never supports violence. It is completely a farmers' agitation but we are there to fight for the farmers' demands," she said.

When asked about the violence, Natarajan said the farmers of Neemuch-Mandsaur are angry over not getting the right price for their yields of soyabean, onion, garlic among others.

Also, many windmills are operating in the region for which land was acquired from the farmers, but the government never gave compensation for the agricultural land, she alleged.

On Chief Minister Shivraj Singh Chouhan's fast, Natarajan said, "He is the CM, what is the need to fast instead he should call a cabinet meeting and pass a proposal on the demands of the farmers."

A special session of the state Assembly should also be called for resolving problems of agri sector apart from the Cabinet meeting, she said.

Farmers do not have any say in fixing of the price of their crops and the government is not listening to their demands, Natarajan alleged.

She urged the Narendra Modi government to implement the recommendations of Swaminathan commission report.

Natarajan said the Central government should waive all the farm loans as the agriculture sector is facing problems.

Mandsaur-Neemuch region, where had always been a stronghold of the BJP. Six MLAs out of the seven assembly seats of the two district are from the BJP while 1 MLA is from the Congress.

The Mandsaur-Neemuch region, about 300 km from the state capital Bhopal, became the nerve centre of the gathering storm of farmer distress. Later, protests spread to some other parts of the state.

In Mandsaur, the curfew was imposed after five persons were killed in police firing during a farmers' protest on June 6.

Chief Minister Shivraj Singh Chouhan yesterday launched an indefinite fast in state capital Bhopal with an appeal for peace and met farmer leaders, but failed to reach a compromise.