Kejriwal also warned that if the Modi government failed to do so, the party would conduct a 'BJP, quit Delhi' campaign. 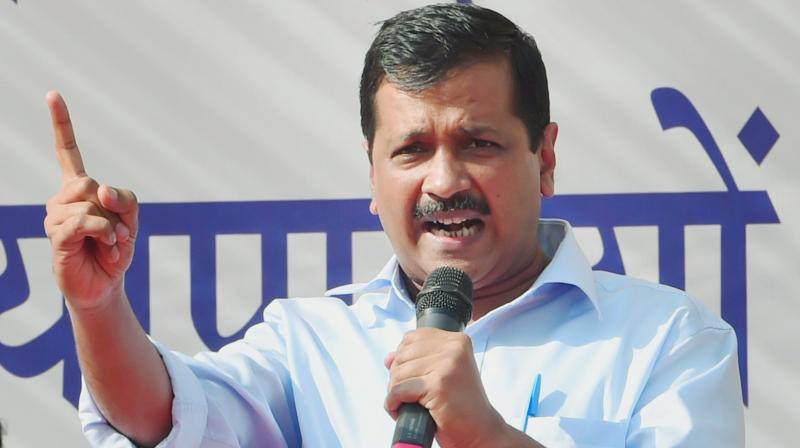 'We will have to fight for development of Delhi, our children's future... I want to ask Modi ji that he had promised full statehood status to Delhiites during the last Lok Sabha election. I want to ask him whether it was 'jumla',' Kejriwal said. (Photo: PTI | File)

New Delhi: In a rhetorical speech in the Delhi assembly, Chief Minister Arvind Kejriwal on Monday announced that the AAP would campaign for the BJP during the 2019 Lok Sabha election if Delhi was granted full statehood.

He also warned that if the Modi government failed to do so, the party would conduct a "BJP, quit Delhi" campaign.

"I want to say to BJP, give full statehood status to Delhi before Lok Sabha polls, every vote of people will go in favour of BJP and we (AAP) will campaign for them in Lok Sabha election," Kejriwal said in the assembly.

"But, if they (BJP) do not give full statehood to Delhi, people here will say that BJP walon, Delhi chodo (BJP, quit Delhi)," he added.

Speaking on the government's resolution that seeks full statehood status for Delhi that was adopted in the assembly, Kejriwal sought to know from Prime Minister Narendra Modi whether his promise to give full statehood to Delhi during the 2014 Lok Sabha election was just a "jumla" (election rhetoric).

"We will have to fight for development of Delhi, our children's future... I want to ask Modi ji that he had promised full statehood status to Delhiites during the last Lok Sabha election. I want to ask him whether it was 'jumla'," he said.

Lok Sabha elections are scheduled to be held in 2019. Ahead of polls, the Arvind Kejriwal-led Aam Aadmi Party has decided to strongly raise the issue of full statehood among people in Delhi.

Under its campaign, AAP has given workers a slogan - "LG, quit Delhi"

In the 2014 Lok Sabha polls, BJP had won all seven seats in Delhi.

Kejriwal alleged that the people of Delhi were being "harassed" by the Centre at a scale the British had not done during their rule.

Equating the lieutenant governor with viceroys during the British rules, Kejriwal said that Delhi was being ruled by "Kings" since 1556, adding that in 1947, India got independence, but Delhi is yet to get "freedom" as they (Centre) have appointed LG in place of viceroys, who are ruling the national capital.

"There is no people's rule in Delhi. King LG is running Delhi...I want to ask why we (Delhiites) have not got freedom yet. Our ancestors had also fought for India's freedom..." Kejriwal said in the Delhi Assembly.

Giving a call for "freedom of Delhi", the AAP's national convener said that the time has come for the people of Delhi to "fight for their freedom" and implement the "people's rule" in Delhi, and "throw away LG's rule".

Invoking Bal Gangahar Tilak, Kejriwal said, "Swaraj mera Janam sidh adikar hai (Swaraj is my birthright)...we will implement swaraj in Delhi as LG is only accountable to the prime minister, and not the people of Delhi."

He said that in 1992, the central government had made a system to hold elections in Delhi as the British had done the same in 1935 under which elections used to be held, but "viceroys had power".

"The Centre had made a bad joke with Delhi in 1992. I want to ask why Delhiites are treated as second class citizens. Why are we half citizens? Why the cost of Delhiites' vote is zero?" he said.

Kejriwal said that in Delhi, "BJP's LG" doesn't allow the government to work, adding that "King LG" creates hurdles in the government's work.

Yesterday, eyeing Lok Sabha elections, the AAP has decided to hold meeting at 300 locations across Delhi on the issue of full statehood to Delhi.

Under the plan, the AAP will also hold workers' convention on July 1 where Kejriwal will address party workers on the issue.