‘The non-politicised nature of changes can be seen from the fact that new estimates bumped up growth for 2013-14,’ Arvind said. 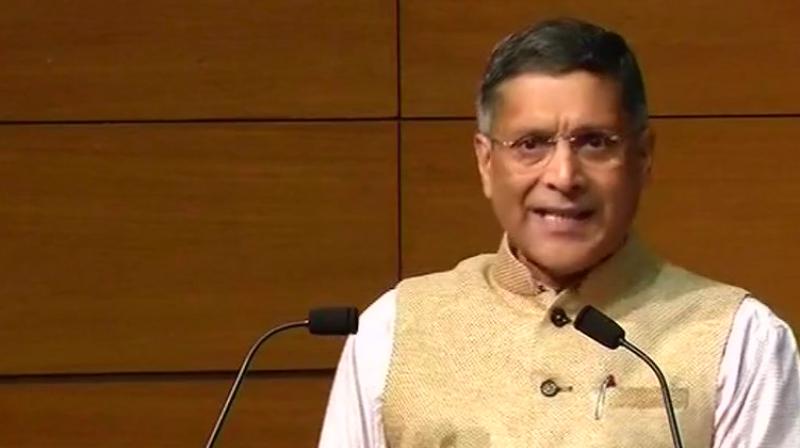 ‘India changed its data sources and methodology for estimating real gross domestic product (GDP) for the period since 2011-12. This paper shows that this change has led to a significant overestimation of growth,’ former chief economic adviser Arvind Subramanian said in his paper. (Photo: ANI)

New Delhi: Arvind Subramanian, Narendra Modi government's former chief economic adviser, has deduced that India's economic growth rate has been overestimated by around 2.5 percentage points between 2011-12 and 2016-17 due to a change in methodology for calculating GDP.

India's gross domestic product (GDP) growth rate between this period should be about 4.5 per cent instead of the official estimate of close to 7 per cent, he said in a research paper published at Harvard University. "India changed its data sources and methodology for estimating real gross domestic product (GDP) for the period since 2011-12. This paper shows that this change has led to a significant overestimation of growth," he said in the paper.

Manufacturing is one such sector where the calculations have been wrongly measured, wrote Subramanian, who quit as the chief economic adviser in August last year before his extended tenure was to end in May 2019. He said the implication of this is: "Macro-economic policy too tight. Impetus for reform possibly dented. Going forward, restoring growth must be highest priority, including finance government's laudable inclusion agenda. GDP estimation must be revisited."

"The non-politicised nature of the changes can be seen from the fact that the new estimates bumped up growth for 2013-14, the last year of the UPA-2 government."

"My paper focuses on original, technical methodological changes which are distinct from more recent GDP controversies such as "back-casting" and puzzling upward revisions for latest years." He said the evidence, based on disaggregated data from India and cross-sectional/panel regressions, is robust.

Dr Subramanian explains that when he was working with the government, he had come across conflicting data and "raised doubts frequently" with the government. "But the time and space afforded by being outside government were necessary to undertake months of very detailed research, including subjecting it to careful scrutiny and cross-checking by numerous colleagues, to generate robust evidence," he says.