The government, however, said that it is not fair to compare India with other countries that have lesser population. 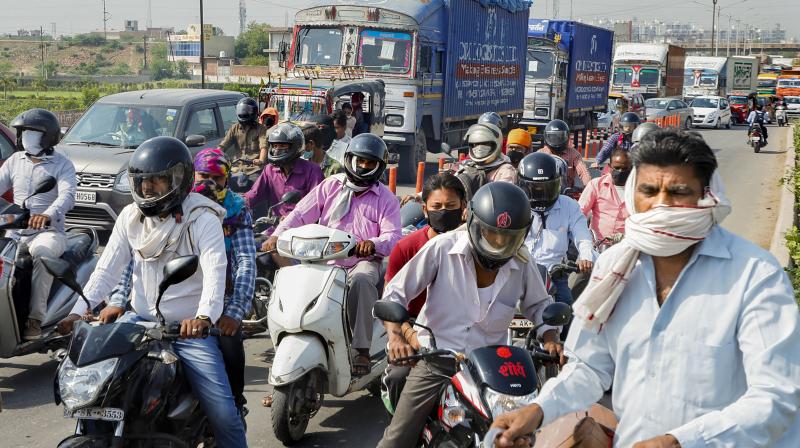 Back to work for Indians. (PTI)

New Delhi: With 2,97,001 lakh cases so far (as per worldometers.info), India on Thursday surpassed United Kingdom in total coronavirus cases to become the fourth worst-hit country in the world.

The government, however, said that it is not fair to compare India with other countries that have lesser population. Officials said the situation is very much under control and fewer deaths are being reported in India compared to other nations. The government asserted that the virus is “definitely not in the community transmission stage” in the country. As per the data on worldometers.info, India till Thursday evening had 9,846 deaths.

With 357 fatalities in the last 24 hours, India recorded biggest jump in COVID-19 related deaths, taking the total toll to 8102 as per union ministry of health and family welfare. The total number of cases as per government is 2,86,579 till Thursday morning after 9,996 new cases were detected.

Quoting a sero-survey conducted by ICMR that covered 26,400 people in the most affected areas of the country, to check the prevalence of the virus among population, ICMR chief Dr Balram Bhargava said only 0.73 per cent of the population in the selected 83 districts had evidence of past exposure to SARS-CoV-2 or COVID-19.

He added that lockdown and containment has been successful in preventing rapid spread of the virus. He, however, added that a large proportion of the population is still susceptible and risk is higher in urban (1.09 times) and urban slums (1.89 times) than rural areas. He said that the infection fatality rate is very low in the country with 0.08 per cent.

Bhargava underlined that urban slums are highly vulnerable for the spread of the infection and local lockdown measures need to continue as already advised by the government. Similarly, elderly, persons with chronic morbidities, pregnant women and children less 10 years of age need to be protected as they fall in the high-risk category.

Union health ministry officials said the recovery rate in India is improving and is 49.21per cent now. During the last 24 hours, a total of 5,823 COVID-19 patients have been cured among the total 1,41,028 so far.  India currently has 1,37,448 active cases under medical supervision and the number of patients recovered exceeds the number of active patients.