'No need to take them seriously': MEA on Al-Qaeda chief's threat to India

'We listen to these kinds of threats on a daily basis,' MEA's Raveesh Kumar said. 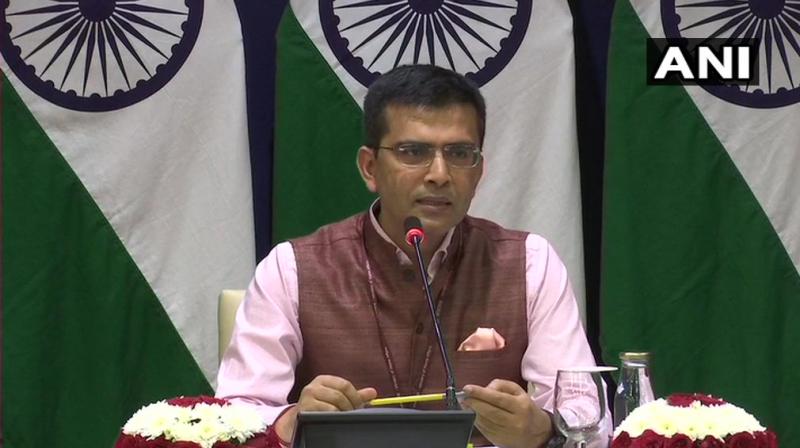 Our security forces are well equipped and capable of maintaining our territorial integrity & sovereignty. (Photo: ANI)

New Delhi: Responding to a question from the media on the threat that was made by Al-Qaeda chief Ayman al Zawahiri's through a video, Ministry of External Affairs spokesperson Raveesh Kumar said, "Aisi dhamkiyaan jo hai na hum sunte rehte hain, mujhe nahi lagta inko seriously lena chahiye." (We hear these kinds of threats on a daily basis. I don't think we need to take them seriously.)

He also said that the Indian security forces are well equipped and capable of maintaining the territorial and sovereignty.

Talking about the Kartarpur Corridor he said, "Want project to be expeditiously completed, as far as infrastructure is concerned, work on 2 important aspects, on state of the art passenger terminal&on 4-lane highway which is going to connect zero point of Kartarpur Corridor to national highway, they are ongoing & we are hopeful that the work on these 2 projects will be completed in time, one by Sep 2019 & other by October 2019. So reports which say that that we're slow in terms of finishing our projects, it's not the correct depiction."

He continued, saying, "We have taken it up with Pakistan in the past not only on infrastructure related points, including the construction of a bridge, I think there is some discussion going on whether there should be a bridge or a paved road but even on other aspects."