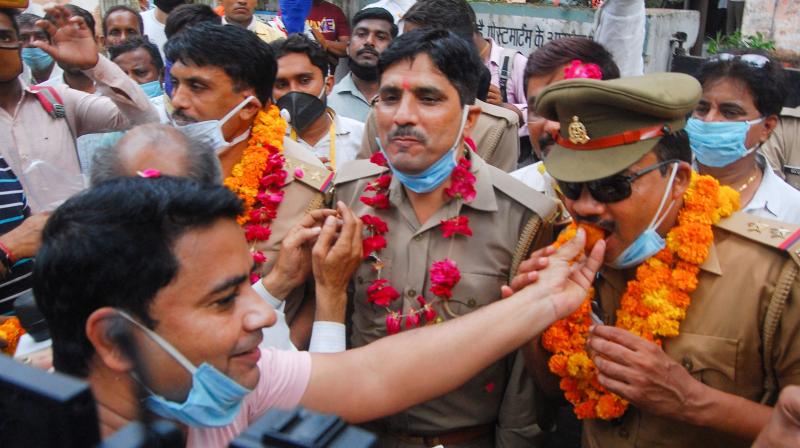 Kanpur: If the killing of gangster Vikas Dubey followed the long-standing template of a ‘police encounter’, the aftermath too has followed a script developed in recent years for such purposes. In Kanpur, outside the mortuary where the gangster’s body was taken after his killing on the road from Ujjain, police officers were fed laddus and showered with petals, an observance that was first invented in Hyderabad when police killed three men who allegedly had raped a veterinary doctor.

At the crematorium where Vikas Dube’s body was reduced to ashes, even his wife said her husband had been “wrong” and deserved "this fate". But then Richa Dube also lashed out at mediapersons, holding them responsible for the death of her husband.

Dubey was shot dead Friday morning by the UP police who claimed he tried to flee when the car carrying him from Ujjain overturned on an isolated stretch of the highway on the outskirts of the city. Dubey had allegedly masterminded the killing of eight policemen on July 2 when they went to arrest him at his village Bikru.

The killing has been described by civil rights groups and opposition political parties as a murder by the police.

A large number of policemen were there at Dubey’s final rites in Kanpur, apparently to maintain security. Superintendent of police (rural) Brijesh Srivastava told reporters that the gangster’s brother-in-law Dinesh Tiwari performed the last rites at the electric crematorium in the presence of Vikas Dubey’s wife and son.

Emerging from the crematorium, Richa Dubey looked agitated and said, “Yes, yes, yes. Vikas did wrong and he deserved this fate.”

After the last rites, policewomen took Richa and her son in their vehicle to an undisclosed location. No police official was ready to say whether or not they were let off later.

Earlier, Vikas's father Ram Kumar Dubey too distanced himself from the gangster and justified police action. “Whatever the police did was right,” he had said and declared that he would not attend the last rites.

Dubey's other relatives and neighbours too did not turn up for the cremation despite police urgings.

In Vikas Dube’s village of Bikru, there was eerie silence outside the demolished house of the gangster. About 60 policemen were posted to the site after news broke that he had been killed in an encounter.

The house was demolished by the Kanpur district administration on Saturday. The policemen sat on bed stands under a Neem tree and responded to media personnel’s questions with stony silence.

The house is around 18 km from Chaubeypur police station, where a new station officer has taken over after all the policemen posted there were shunted out after the Vikas Dubey gang ambushed and killed eight cops who went to arrest him.

The new SHO, however, politely refused to speak.

Locating Dubey's house was not very difficult as everybody in neighbouring villages knows by now where the dreaded criminal lived in the area. They were willing to tell the direction.

But, the scene at Dubey's village Bikru was quite opposite: people remained indoors and refused to speak about him and the killing of eight cops he was alleged to have masterminded.

Dubey was accused of masterminding an ambush at his Bikru village on the night of July 2. Eight policemen, including DSP Devendra Mishra, were killed, triggering a manhunt for him.

Madhya Pradesh police arrested him in Ujjain. He was being brought back to Kanpur by UP police, who claim they shot him when he tried to escape.