Attacking Gandhi, Ananth Kumar said government till last moment tried to ensure the passage of the bill, but Congress stalled its passage. 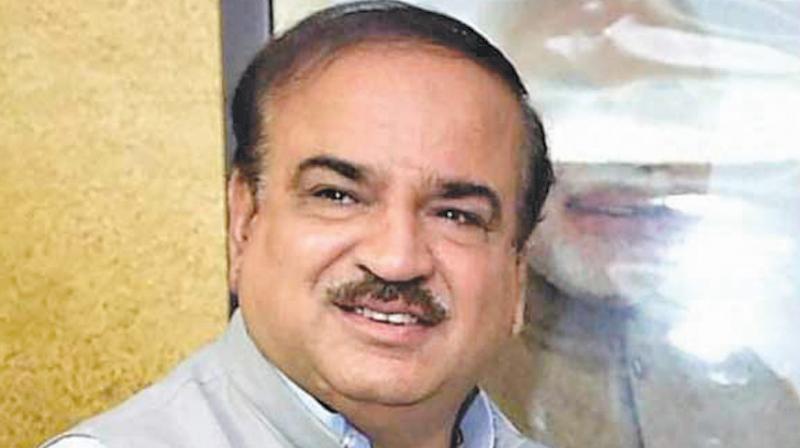 'The triple talaq bill which ensures gender justice was unfortunately not allowed to be passed by Congress and its president Rahul Gandhi,' Kumar told reporters. (Photo: File)

New Delhi: The BJP on Friday held Congress president Rahul Gandhi responsible for the triple talaq bill not getting the parliamentary nod in the Monsoon Session, saying his party supported it in the Lok Sabha but not in the Rajya Sabha for its vote bank politics.

Attacking Gandhi, Parliamentary Affairs Minister Ananth Kumar said the government till last moment tried to ensure the passage of the bill, but Congress stalled its passage.

"The triple talaq bill which ensures gender justice was unfortunately not allowed to be passed by Congress and its president Rahul Gandhi," Kumar told reporters.

He further said the Modi government is committed for the welfare of Muslim women.

Union Law Minister Ravi Shankar Prasad who also raised the issue in the Rajya Sabha where the bill was to be taken up for discussion, said the Congress today stands exposed, the party just wanted to stalled the passage of this landmark bill.

"It is unfortunate and painful that more than 300 Muslim women have been given divorce after the Supreme Court judgement and this bill was very important but opposition has some other priorities," he told reporters.

Prasad also said that without explaining the reason or their objection, the Congress kept on demanding that they want the bill to be referred to a Select Committee.

The Union Cabinet had on Thursday cleared some amendments to the draft Muslim Women (Protection of Rights on Marriage) Bill, 2017 bill, including adding a bail provision to it.

The amendments came after the Supreme Court on August 22 last year had struck down 'triple talaq', calling unconstitutional.

The contentious triple talaq bill which criminalises the practice of instant "talaq" could not be taken up for discussion and passage in Rajya Sabha on the last day of Monsoon session on Friday, owing to lack of consensus among political parties on the issue.

The Congress-led Opposition has been demanding that the bill be sent to the Select Committee for further scrutiny.

The BJP-led government, which does not have a majority in the Upper House, had also made efforts to get the bill cleared in the Budget Session also.

The Lok Sabha, which passed the bill in December, was adjourned sine die on Friday.

Kumar termed the Monsoon Session a landmark session, saying 21 bills were passed in the House which sat for 20 hours more than the allocated time.