Rajkot collector Rahul Gupta said 1,425 people were shifted to safer places after release of water from Aji, Nyari and other dams. 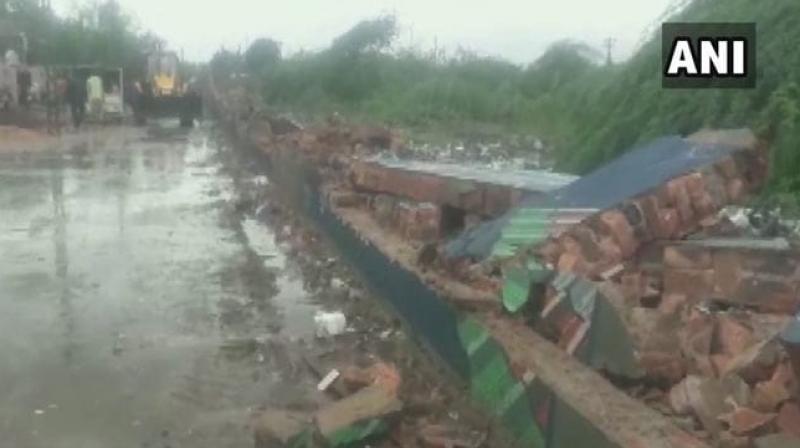 Ahmedabad: Nineteen persons were killed in rain-related mishaps in Gujarat on Friday night and on Saturday, including 16 deaths in incidents of wall/building collapse, as Saurashtra and central Gujarat were pounded by heavy rains.

With every tehsil in the state receiving good rain and water stock in dams at 60 per cent, there is no longer drought anywhere, chief minister Vijay Rupani said.

Eight persons – construction labourers from Madhya Pradesh and their family members – were killed and four were injured when a wall collapsed on their shanties in Morbi city on Saturday afternoon amid heavy rain, said Superintendent of Police Karansinh Vaghela.

In a similar incident, a compound wall collapsed on a family of construction labourers from Udaipur killing a couple and their two children at Bopal in Ahmedabad on Friday night.

Four persons, including a one-year-old girl, were killed and five injured when a three-story building of the Gujarat Housing Board collapsed in Nadiad town of Kheda district on Friday night following heavy rains in the region.

Injured persons were pulled out from the debris and sent to hospital during a seven-hour rescue operation by fire brigade and NDRF that ended at 6 am on Saturday.

An Air Force helicopter was sent after it was learnt that seven persons were stranded at Vavdi in Surendranagar district, but it could not locate anyone despite being at the spot for over 40 minutes, a defence official said.

Rajkot district was put on alert and two teams each of the Army and NDRF were put on stand-by as water was released from dams in the district due to heavy rains in catchment areas, officials said.

Rajkot collector Rahul Gupta said 1,425 people were shifted to safer places in rural areas after release of water from Aji, Nyari and other dams.

Over 1,200 people were shifted to safer places in Rajkot city on Saturday morning, he added.

Chief Minister Vijay Rupani held a review meeting. "Seventeen dams are overflowing. Last year, by the end of monsoon, dams had only 56 per cent water. This year there is 60 per cent water stock in dams already," Rupani told reporters afterwards.

"Sardar Sarovar dam on the Narmada is overflowing (since Friday). Another big dam in South Gujarat, Ukai in Surat district is also on the verge of overflowing," he said.

"South and central Gujarat received heavy rainfall. As per the met department, Saurashtra and Kutch will receive rainfall in coming 24 hours, after which the intensity of rains will decrease," Mr Rupani said, adding that so far 6,000 people have been shifted to safer places from low-lying areas.

All tehsils have received 125 mm or more rainfall this season, and hence there is no longer drought in the state, he said.

Several tehsils of Botad district received heavy showers in 24 hours till 8 am Saturday, with Barvala receiving 380 mm, followed by Mahuda in Kheda district getting 340 mm, Dhandhuka in Ahmedabad 322 mm, and Kadi in Mehsana 301 mm.

In eight hours on Saturday, Tankara tehsil of Morbi district received the highest amount of rainfall in the state at 268 mm, followed by Morbi tehsil at 259 mm, Dhrangadhra in Surendranagar at 209 mm and Rapar in Kutch at 209 mm.