Pakistan had on Friday announced suspension of all train services to India after New Delhi bifurcated J&K state and revoked Article 370. 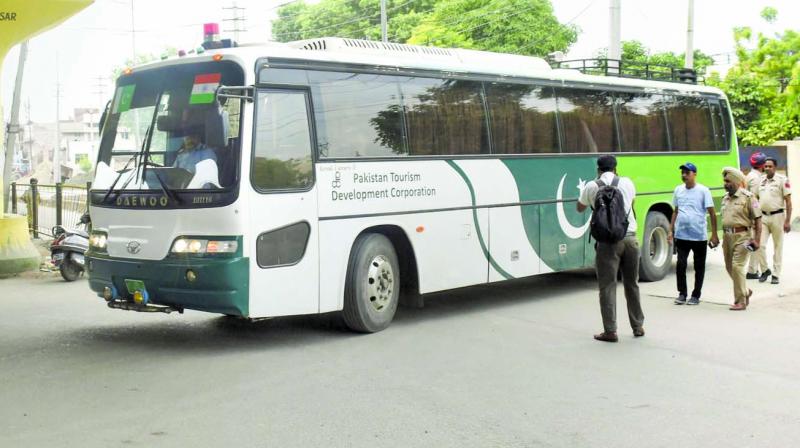 Punjab police personnel escort a Pakistan Tourism Development Corporation bus in Amritsar on Saturday as it returns to Lahore without passengers. (Photo: PTI)

The Pakistan Tourism Development Corporation (PTDC) has apparently informed the Delhi Transport Corporation (DTC) on telephone that the Delhi-Lahore bus service is being suspended but there was no written communication so far to this effect at least till Saturday evening. This was confirmed by DTC officials to this newspaper on Saturday.

The DTC is now in touch with the Union home ministry on the next course of action.

“A PTDC bus carrying two passengers left for Lahore at 6 am from the Ambedkar Stadium bus terminal. Three passengers are on-board a DTC bus coming from Lahore to Delhi,” a senior DTC officer told news agencies.

The bus service was first started in February 1999 but suspended after the 2001 Parliament attack in India. It was restarted in July 2003.

The move is in line with the decisions taken during a meeting of Pakistan's National Security Committee (NSC) held on Wednesday, Pakistan minister for communications and postal services Murad Saeed said.

The Lahore-Delhi bus service is operated from Ambedkar Stadium terminal near Delhi Gate. DTC buses ply every Monday, Wednesday and Friday and PTDC buses every Tuesday, Thursday and Saturday, from Delhi to Lahore.

For the return trip, DTC buses leave Lahore every Tuesday, Thursday, and Saturday whereas the PTDC buses are available every Monday, Wednesday, and Friday.

Pakistan had on Friday announced suspension of all train services to India after New Delhi bifurcated J&K state and revoked Article 370.

Meanwhile, according to news agency reports, the Thar Express from Pakistan reached India on Saturday afternoon, while the Karachi-bound train is on its way to the neighbouring country, officials said.