The Parliament had earlier this week given its nod to the legislation for bifurcating Jammu and Kashmir. 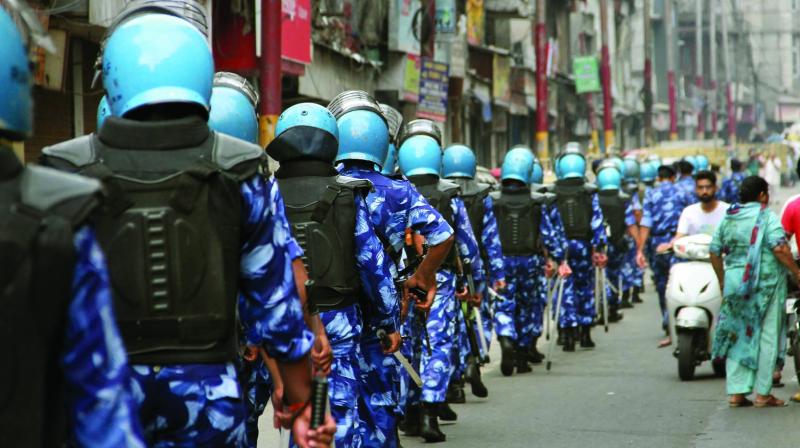 Rapid Action Force personnel patrol a street during restrictions in Jammu on Friday. Restrictions have been imposed in several districts J&K after the state lost its special status. (Photo: PTI)

New Delhi: The Jammu and Kashmir National Conference on Saturday moved Supreme Court challenging the abrogation of Article 370 granting special status to the state and its bifurcation into two Union Territories — Jammu and Kashmir, Ladakh.

The two National Conference Lok Sabha members — Mohammad Akbar Lone and Hasnain Masoodi — representing Baramulla and Anantnag constituencies respectives, have sought declaration that the Presidential Order by which the special status of J&K was abrogated and the state was subsequently bifurcated into two Union Territories, is “unconstitutional, void and inoperative”.

Both Mr Lone and Mr Masoodi have contended whether the central government under the President’s rule could unilaterally alter the “unique federal scheme” without taking recourse to  “due process and the rule of law” involving the consent of the J&K assembly.

The abrogation of Article 370 and bifurcation of J&K in two Union territories, the two NC law makers have contended goes to the “heart of the Indian federalism, democratic processes and the roll of Supreme Court as the guardian of the federal structure.”

Contending that Article 370 was a  “self contained code that defined and regulated the relationship between the state of Jammu and Kashmir and the Union of India”, the petitioners said that “Article 370 (Article 306A of the Draft Constitution) was extensively considered and carefully drafted, …to ensure the peaceful and democratic accession of the former princely state of Jammu and Kashmir to the Indian Union.”

The two parliamentarians from Jammu and Kashmir contended in the petition, filed through Advocate Mahesh Babu, that the Presidential Orders and the new legislation “unconstitutionally” undermines the scheme of Article 370.

The Parliament had earlier this week given its nod to the legislation for bifurcating Jammu and Kashmir.