One protestor said that Zomato is not paying heed to their grievances and is forcing to deliver beef and pork against their will. 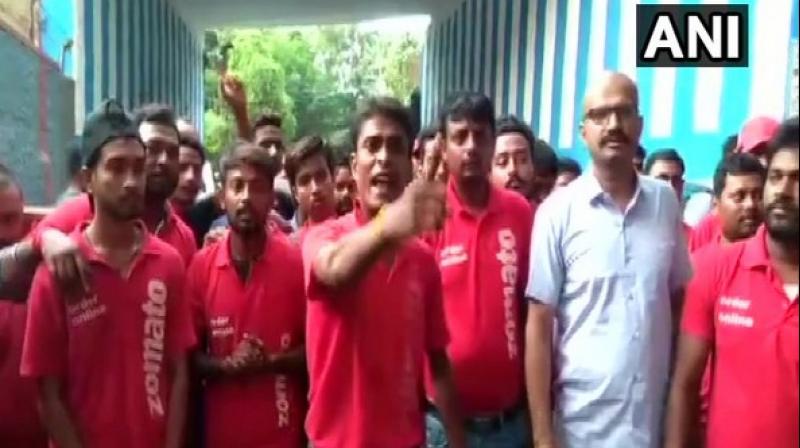 On behalf of others, he demanded the company to immediately stop the beef and pork delivering service and also sought a revision of their salaries. (Photo: ANI)

Howrah: Food delivery app Zomato has again made headlines as its executives in Howrah went on an indefinite strike protesting against delivering beef and pork contending, doing so hurts their religious sentiments.

Amid slogans "Zomato ki dadagiri nahi chalegi" raised by protestors, one of the protestors told ANI that the company is not paying heed to their grievances and is forcing to deliver beef and pork against their will.

"The company is not listening to our demands and forcing us to deliver beef and pork against our will. Hindus have a problem is delivering beef while Muslims do not want to deliver pork. Our Hindu friends are having a problem in delivering beef and they are denying doing so. It's been heard that in few days we have to deliver Pork, which we have also refused to do. We are not ready to deliver such things on any condition. We are forced to deliver such things. The company has also rolled back our payout. We have been on strike for a week now," protestor Mausin Akhtar claimed.

On behalf of others, he demanded the company to immediately stop the beef and pork delivering service and also sought a revision of their salaries.

"They (company) is playing with our religious sentiments. The company is also threatening us. The company asks us to deliver any kind of order to the customer. We, the Hindus, were asked to deliver beef while in coming days our Muslims brothers will be asked to deliver pork. This is not acceptable. We demand company not to play with our religious sentiments and also payouts should also be revised," another employee claimed.

Meanwhile, reacting on the same, Minister for Irrigation in West Bengal government, Rajib Banerjee said that the organisation should not force any person to go against their religion.

"The organisation should not force any person to go against their religion. It is wrong. Now that I have received information in this regard, I will look into it the matter," Banerjee said.

However, Zomato is yet to react in the matter.

A few days back, Zomato was in the news after a customer declined to receive an order which was being delivered by a non-Hindu rider. Reacting on the same, the company supported its employees.