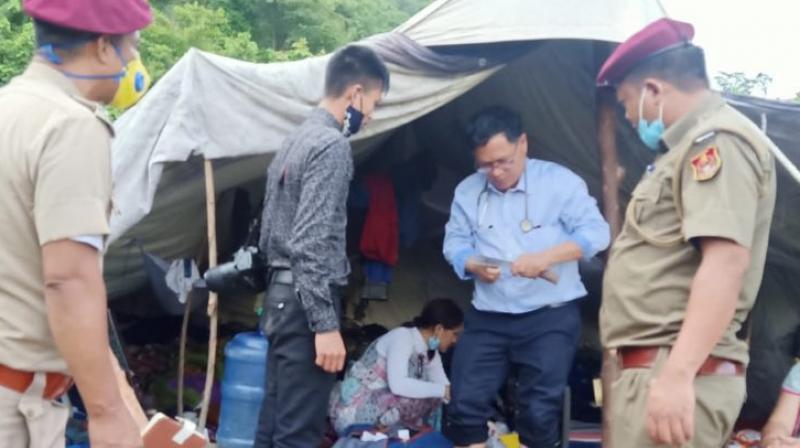 In this file image ZR Thiamsanga was treating a policeman at the Myanmar border. (@DIPR_Mizoram)

Aizawl: Mizoram legislator ZR Thiamsanga, who was visiting the earthquake-hit areas of the remote Champhai district, performed an emergency caesarean and helped a woman deliver when he was told that no doctor was available to attend to her.

Thiamsanga, a doctor by profession who specialises in obstetrics and gynaecology, often puts on his stethoscope to attend to medical emergencies in remote areas.

He was on a visit to his constituency, Champhai North near the Myanmar border, on Monday to assess the damges caused by the recent earthquakes and take stock of the COVID-19 situation.

C Lalhmangaihsangi (38) from the remote Ngur village, who was expecting her second child, was bleeding profusely and her condition was critical, Thiamsanga told PTI.

The medical officer of the Champhai hospital was on leave due to health issues and the woman was not in a position to travel to Aizawl, about 200 km away, he said.

When I was informed about the condition of the woman, I immediately rushed to the hospital and performed an emergency caesarean, he added.

The mother and the baby are doing well, he said.

Thiamsanga said it was his responsibility to help those in need.

In June, he hit the headlines when he rushed to attend to an ailing security personnel guarding the India-Myanmar border, crossing a stream and walking several kilometres.

He is at present also the vice-chairman of the state Health and Family Welfare Board.