India   All India  11 Aug 2020  Modi to CMs in video conference: Defeat coronavirus in your states so we can emerge winner
India, All India

Modi to CMs in video conference: Defeat coronavirus in your states so we can emerge winner

Modi said the recovery rate has gone up which, he added, meant that government efforts have proved to be effective. 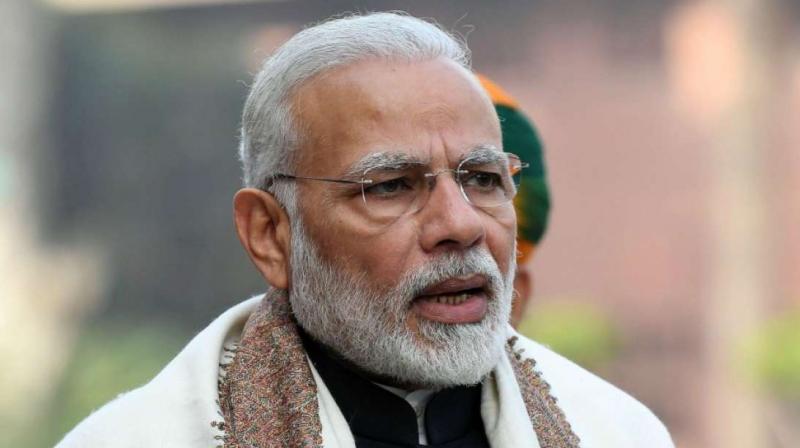 New Delhi: Prime Minister Narendra Modi noted on Tuesday that 10 states account for over 80 per cent of active COVID-19 cases, and asserted if the virus is defeated in these states, then the country will also emerge victorious in its fight against the pandemic.

At a video conference with chief ministers and representatives of these 10 states, including Bihar, Uttar Pradesh, Punjab, Andhra Pradesh, Maharashtra and Tamil Nadu, Modi said the recovery rate has gone up which, he added, meant that government efforts have proved to be effective.

The Centre and states have been able to work as a team in the fight against COVID-19, he said.

"Our experience so far is that containment, contact tracing and surveillance are the most effective weapons against the pandemic with experts of the view that if positive cases are identified within 72 hours of onset, then infection slows down to great extent," the prime minister said.

The prime minister pointed out that the number of active cases in the country stands at over six lakh, and most of them have been reported from the 10 states.

Today, 80 per cent active cases are in these ten states. Hence the role of all these states is very big in the fight against coronavirus, he said.

He told the participants that such meetings and discussions are necessary as new situations are emerging amid the pandemic.

"Pressure on hospitals, pressure on our health workers, lack of continuity in everyday work. They bring a new challenge every day" Modi elaborated.

He said there was a need for the ten states to sit together, review and discuss. "... from this discussion, we also leant a lot from each other's experiences, best practices" he said.

Modi said it was a matter of satisfaction that the average fatality rate in India has been going down and noted that it has been very low compared to the world average.

He noted that the number of daily tests has reached almost 7 lakh and is increasing continuously, which has helped in early identification and containment. The average fatality rate in the country is amongst the lowest and is continuously going down.

The percentage of active cases is reducing, while the recovery rate is increasing, he said. He noted that these steps have boosted the confidence of people, and said that the target of bringing down the fatality rate below one per cent can be achieved soon.

States where testing rate is low and where the positivity rate is high, the need to increase testing has come to the fore. Especially in states like Bihar, Gujarat, UP, West Bengal and Telangana, he said.

Modi noted that people have become aware and are ably assisting these efforts, as a result of which the country has been successful in using home quarantine so effectively, the statement said.

He said at one point of time, cases in certain districts of UP and Haryana, and Delhi became a matter of concern.

He also referred to statement of the Delhi government about COVID-19 cases and recounted the experience of Home Minister Amit Shah in preparing a roadmap for tackling the pandemic together with Delhi and nearby states.

According the statement, he said the main pillars of this strategy were segregation of containment zones and focus on screening, especially of those in high risk category.

The results of these steps are there for all to see, he said, adding that steps like better management in hospitals and increasing ICU beds also proved very helpful.

The chief ministers provided feedback on the ground situation in their states. They praised the leadership of the prime minister for the successful management of the pandemic and thanked him for his constant guidance and support, it said.

They talked about tests being conducted, steps taken to increase testing, use of tele-medicine and efforts to ramp up health infrastructure.

They requested further guidance by the Health Ministry for conducting sero-surveillance, while also suggesting setting up of an integrated medical infrastructure in the country.

Defence Minister Rajnath Singh emphasised that the government is making all possible efforts in this battle against the virus, which have been praised by the World Health Organization as well, the statement said.

Secretary, Ministry of Health and Family Welfare presented an overview of COVID cases in the country, noting that the rate of growth of cases in some states is higher than the average rate, and requested the states to focus on optimal utilisation of testing capacity.

He emphasised on the need for reporting accurate mortality figures and also talked about perimeter monitoring of containment zones with the help of local communities.