After an intense debate on the bill, it was supported by all political parties and the Opposition and was passed by a two-thirds majority 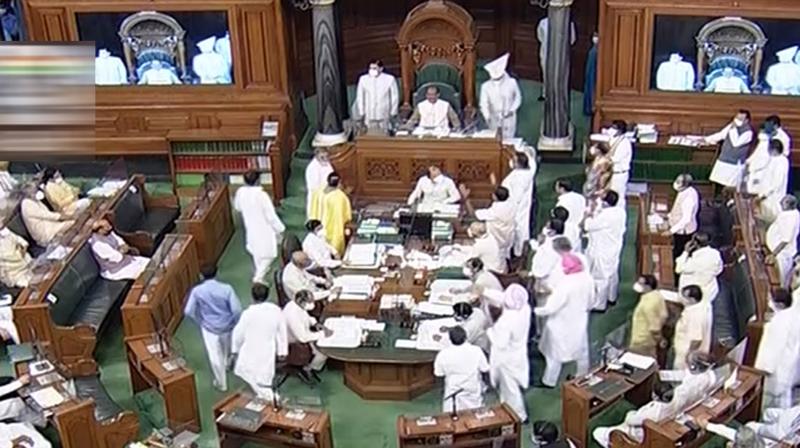 In the voting, 385 were in favour while no one voted against it. The amendments moved by the Opposition members were rejected by the House. (LSTV/PTI Photo)

New Delhi: The Lok Sabha on Tuesday unanimously passed the Constitution (127th Amendment) Bill 2021. This bill, introduced on Monday, aims to clarify provisions in the 102nd Constitution Amendment Bill and restore the power of states to have their own lists of backward classes so that they can be provided with the benefits of reservation.

After an intense debate on the bill, it was supported by all political parties and the Opposition and was passed by a two-thirds majority in the Lower House. In the voting, 385 were in favour while no one voted against it. The amendments moved by the Opposition members were rejected by the House.

The passing of the bill came as a thaw in the logjam over the Pegasus snooping row as members cutting across party lines backed it. During the debate, several Opposition parties, including the Congress, sought the removal of the 50 per cent cap on reservations, while the government underlined its commitment to social justice.
This was the first time since the Monsoon Session began on July 19 that the Lok Sabha witnessed a debate in an orderly way as the Opposition put their protests demanding a debate on the Pegasus snooping issue on hold for the bill.

During the debate, many leaders such as BJP ally JD(U)’s Lalan Singh, Samajwadi Party’s Akhilesh Yadav, BSP’s Ritesh Pandey and DMK’s T.R. Baalu demanded a caste census be conducted throughout the country.

The 102nd Constitution Amendment Act of 2018 inserted Articles 338B, which deals with the structure, duties and powers of the National Commission for Backward Classes, and 342A, that deals with the powers of the President to notify a particular caste as an SEBC and the power of Parliament to change the list. Article 366 (26C) defines SEBCs.

Initiating the debate, Congress’ Lok Sabha leader Adhir Chowdhury extended his party’s support to the bill but criticised the government for the 2018 amendment, saying had the government inserted the suggestion proposed by the Opposition, the current situation would not have arisen.

“You tweaked the Constitution by bringing the 102 Constitution Amendment Bill in 2018 which gave people opportunity to go to the court and finally the Supreme Court removed the states’ power,” he said.

Mr Chowdhury also attacked the government for allegedly running away from debate on Pegasus “snooping” spyware issue, saying country after country like Hungary, the United States and Israel had ordered probes into the controversial issue. “We support this bill, but our demand is to remove the 50 per cent ceiling (in reservations). You should listen to the states, make it legal for the states to cross the 50 per cent ceiling,” Mr Chowdhury said.

Intervening in the debate, labour minister Bhupender Yadav asserted the maximum measures to ensure justice for dalits, OBCs and the poor had been taken by the Narendra Modi government.

The NCP’s Supriya Sure said the credit for this amendment bill should be given to the Maharashtra government which requested the Centre to address the issue of OBC reservations. Ms Sule said another important issue along with this legislation was to address the 50 per cent ceiling on reservations without which the amendment will not fully resolve the issue. The YSR Congress and the Shiv Sena also voiced full support.