India   All India  11 Sep 2019  'You can't control us with arrests,' says Chandrababu Naidu
India, All India

'You can't control us with arrests,' says Chandrababu Naidu

The house arrest comes ahead of TDP's call for protest march over increasing attacks on its workers allegedly by YSR Congress Party. 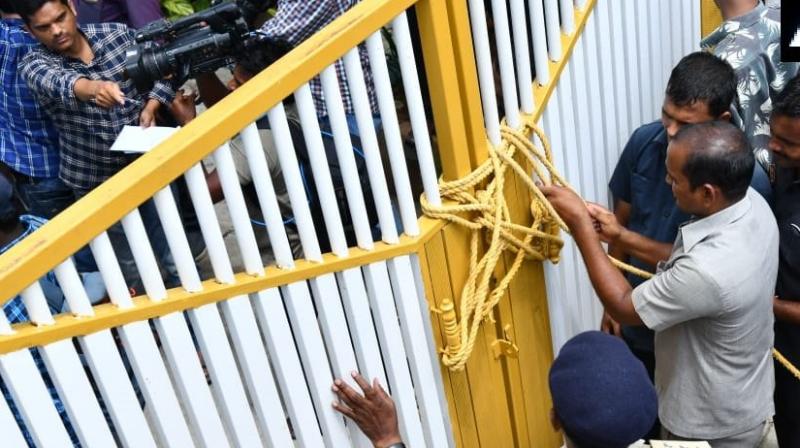 Amaravati: Former chief minister and Telugu Desam party chief N Chandrababu Naidu, his son Nara Lokesh and several other leaders have been placed under house arrest. The arrest comes ahead of the party’s call for a protest march over increasing attacks on its workers allegedly at the behest of the ruling YSR Congress Party.

Section 144 has been imposed in Narasaraopeta, Sattenapalle, Palnadu and Gurajala. With the TDP cadre not being allowed to protest, Naidu has called for a 12-hour hunger strike across the state.

01:05 pm: Police has locked the main gate of TDP Chief and former Andhra Pradesh CM Chandrababu Naidu's residence. He was leaving for Atmakur for party's 'Chalo Atmakur' rally despite being put under preventive custody by the police.

Amaravati: Police has locked the main gate of TDP Chief and former Andhra Pradesh CM Chandrababu Naidu's residence. He was leaving for Atmakur for party's 'Çhalo Atmakur' rally despite being put under preventive custody by the police. pic.twitter.com/DDj9cLbJAg

11:40 am: Chandrababu Naidu said, “This government is violating human rights and fundamental rights. I am warning the government. I am warning police also. You cannot play this type of politics. You cannot control us by arresting. Whenever they allow me, I'll continue 'Chalo Atmakur'.”

11:15 am: N Chandrababu Naidu tries to leave for Atmakur from his residence in Amaravati for his party's 'Chalo Atmakur’ rally, called against alleged political violence by YSRCP.

10:50 am: Nara Lokesh, who is under preventive detention said, “This is dictatorship, we are being stopped in an undemocratic way. TDP leaders and workers are being harassed. YSRCP MLAs are openly threatening us, saying police is with them.”

“The ruling party is trying to strangulate our party across Andhra Pradesh. We were doing our activities in a democratic manner but our entire leadership was put under house arrest. This is the murder of democracy,” he added.

09:50 am: Former TDP MLA Tangirala Sowmya house arrested at Nandigama town after Sowmya and other TDP leaders sat on protest in front of her house for party's ‘Chalo Atmakur’ rally against YSRCP.

09:15 am: Telugu Desam Party Chief N Chandrababu Naidu and his son, Nara Lokesh have been put under preventive detention at their house.