Jaishankar and Wang earlier spoke on the phone on June 17, two days after the deadly clashes in Galwan Valley in eastern Ladakh 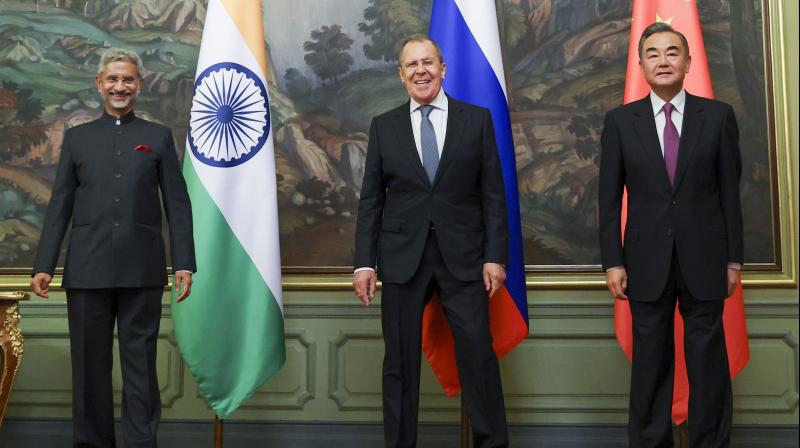 In this photo released by the Russian Foreign Ministry Press Service, the foreign ministers of India, S. Jaishankar, left, Russia, Sergey Lavrov, and China, Wang Yi, pose for a photo on the sidelines of a meeting of Foreign Ministers of Shanghai Cooperation Organisation, Commonwealth of Independent States and Collective Security Treaty Organization Member States in Moscow, Russia. — PTI photo

Moscow/New Delhi: The crucial bilateral meeting on Thursday evening on the sidelines of the Shanghai Cooperation Organisation (SCO) foreign ministers meeting in Moscow between External Affairs Minister S. Jaishankar and his Chinese counterpart Wang Yi—the first face to face meeting between the two after the deadly Galwan clash between Indian and Chinese troops in mid-June—lasted a few hours and ended late in the night close to 11 pm but there was no official word on it immediately.

However, it was expected that EAM Jaishankar would have told his Chinese counterpart that peace on the borders was closely linked to development of bilateral ties between the two Asian giants and that China must de-escalate by dis-engaging its troops to restore the April status quo in the Ladakh sector.

The EAM was also expected to have emphasised to his Chinese counterpart that India wanted a peaceful resolution of the border dispute but was prepared to defend its territory against aggression. India has been emphasising that there should be no unilateral altering of the Line of Actual Control (LAC).

Ministry of External Affairs (MEA) Spokesperson Anurag Srivastava meanwhile told reporters at his weekly briefing in the evening that India is “committed to resolve the issue through peaceful negotiations” and that the two sides continue to be in touch through military and diplomatic channels of communication.

Significantly earlier in the day, both the Indian and Chinese Foreign Ministers also met at a luncheon meeting together with Russian Foreign Minister Sergey Lavrov as part of Russia-India-China (RIC) trilateral cooperation in which views were exchanged on “topical issues of international and regional importance, in the spirit of mutual understanding, friendship and trust”, with all three agreeing that “common development and cooperation of the three countries is conducive to promoting global growth, peace and stability”. The importance of a peaceful resolution of all issues and mutual trust was thus clearly emphasised.

The trilateral luncheon meeting highlighted how the Russians are trying their best to nudge the two Asian giants towards a compromise in order to avoid a devastating war in the Ladakh sector. All three ministers were photographed standing next to each other and smiling, with the Russian Foreign Minister holding centre-stage as the host, in a symbolism that was not lost.

But some observers feel a peaceful resolution of the volatile Sino-Indian military tensions in the Ladakh sector on the ground and repair to the enormous damage caused to bilateral ties may begin if at all only after a meeting between Prime Minister Narendra Modi and Chinese President Xi Jinping that could take place in Moscow on the sidelines of the Shanghai Cooperation Organisation (SCO) Summit sometime possibly next month. The foreign Ministers of all eight SCO member-nations meanwhile held deliberations on Thursday to prepare for the main Summit.