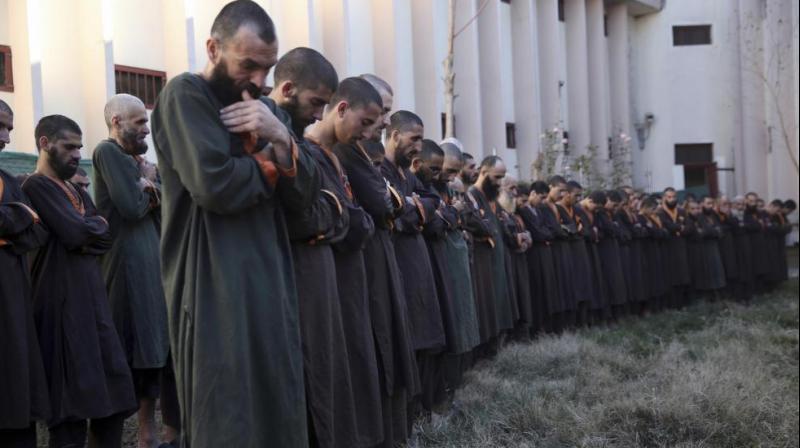 A file photo of Islamic State (ISIS) militants, who were arrested by the Afghan government in Kabul. (Image: AP)

NEW DELHI: The intelligence agencies have warned that the global terror outfit Islamic State Khorasan Province (ISKP) will attempt to disturb the communal harmony in the state and disrupt the upcoming Gujarat Assembly elections by executing incidents of rioting and attacks on the right-wing leaders.

According to the intelligence inputs, the ISKP has directed its cadres in India to use the Gujarat riots as the trigger point for the recruitment of radicalised youths and the issue of the release of the Bilkis Bano case convicts to disrupt the communal harmony in the state ahead of the Assembly election.

The intelligence assessment also suggests that the incidents of rioting and physical attacks on right-wing organisations, religious leaders and security forces may be attempted by these radicalised youths in the coming weeks.

The ISKP is a front of the dreaded terror group Islamic State of Syria and Iraq (ISIS) and its operatives based in the Afghanistan-Pakistan region are coordinating with India-based associates to carry out attacks in India through various means.

The sources in the security grid said that this was not the first occasion wherein the ISKP wanted to execute terror acts in India. It has been trying to spread its footprint in the country ever since the Taliban took over control of Afghanistan on August 15 last year. They try to create their own cadre here with the help of the terror networks of other outfits like Hizbul Mujahideen and Lashkar-e-Tayyaba.

However, the sources in the security agencies have said that adequate security measures will be taken to ensure the maintenance of communal harmony in the poll-bound state and all necessary security drills will be exercised soon to counter these threats.

In late 2021, the intelligence agencies had shared inputs with the stakeholders comprising the paramilitary forces and police administration to take preventive and precautionary measures to thwart these nefarious designs of the jihadis.

The security alert inputs and disclosures made by the ISIS operatives arrested from Jammu & Kashmir and Karnataka last year had indicated continued intent on the part of the Islamic State (IS) terrorists to carry out attacks in India.

The inputs further indicated that the IS operatives based in the Af-Pak region have been coordinating with their cohorts based here to further their nefarious anti-India agenda and, to some extent, Pakistan’s intelligence agency ISI has also been aiding them for terror purposes.

The global terror outfit’s operatives have also assured their Indian associates funds for procuring Kalashnikov assault rifles, small arms, the making of IEDs and preparations for attacks as part of the Islamist terror agenda.

Similar indications that the Pakistan-based remnants of the Indian Mujahideen may have been in contact with IS operatives in India and the Af-Pak region were also revealed soon after the busting of the Voice of Hind network of the ISIS in Jammu & Kashmir and Karnataka, the sources further said.

The inputs have come just weeks after the Russian Federal Security Service detained a suicide bomber, a member of the ISIS, who was plotting a terrorist attack against the Indian leader to avenge the alleged insult to Prophet Muhammad.

The intelligence agencies in India have also been extracting information from their Russian counterparts about the detailed plans of the attacks by the arrested terrorist too.