Power supply and telephone links got disrupted and road communication snapped due to uprooted trees at many places of Gajapati district. 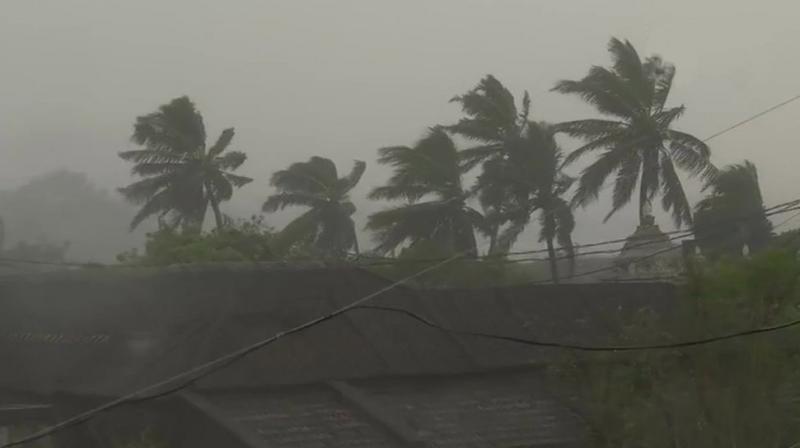 According to a report, officials said there were reports of trees, electric poles getting uprooted and damages to ‘kuchha’ houses. (Photo: ANI | Twitter)

New Delhi: Cyclone Titli uprooted trees and electric poles and damaged hutments in Odisha's Ganjam and Gajapati districts after making landfall early Thursday morning, but no loss of life was reported from any part of the state, officials said. The cyclone also triggered heavy rainfall in at least three districts and caused minor damage to power and communication.

"There has been no major damage or report of casualty received from any part of the state so far. Some destruction was reported from Ganjam and Gajapati districts," Special Relief Commissioner (SRC) B P Sethi said.

Power supply and telephone links got disrupted and road communication snapped due to uprooted trees at many places of Gajapati district, the SRC said.

Efforts are on to clear roads blocked by uprooted trees and restore power supply in affected areas at the earliest, he said. In all, eight districts - Ganjam, Gajapati, Khurda, Puri, Jagatsinghpur, Kendrapara, Bhadrak and Balasore - have been affected by "very severe cyclone Titli", he said.

According to the India Meteorological Department (IMD), the very severe cyclone landfall process started on Thursday morning with surface winds reaching speeds of 126 km/hr at Gopalpur in Odisha’s Ganjam district.

“Titli”, in Hindi means butterfly and has been categorised as a “very severe cyclonic storm”.

All schools, colleges and anganwadi centres in various districts of Odisha are closed today.

Chief Minister Naveen Patnaik, who took stock of the situation, asked the collectors of Ganjam, Puri, Khurda, Jagtsinghpur and Kendrapara districts to start the evacuation process of the people in low-lying areas immediately in the coastal belt.

As part of its pre-cyclone preparedness, the Odisha government has evacuated over 3 lakh people living in low-lying areas of the five coastal districts ahead of the landfall. They were accommodated in 1,112 cyclone shelters. Altogether, 105 pregnant women in Ganjam district and 18 in Jagatsinghpur have been shifted to hospitals, the SRC said. He said 13 teams of the National Disaster Response Force (NDRF) and the Orissa Disaster Rapid Action Force (ODRAF) have been deployed at several places along with fire brigade.