Constructed 45 years ago on the banks of the Daya river by a group of Japanese monks led by Nichidatsu Fuji Guruji. 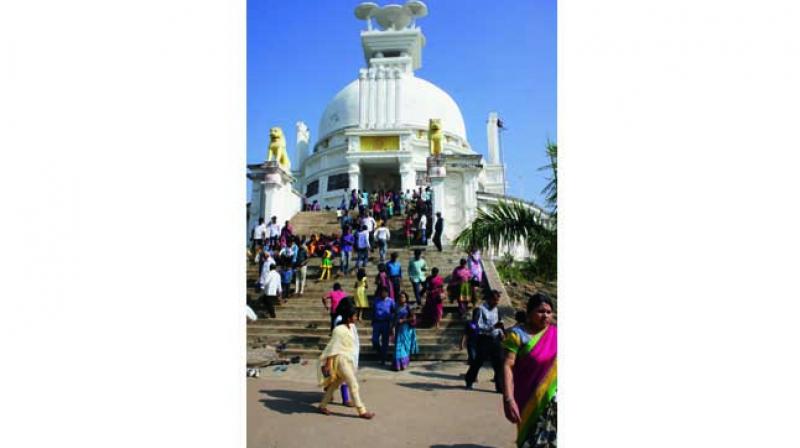 The Dhauli Shanti Stupa in Bhubaneswar

Bhubaneswar: The Dhauli Peace Pagoda, famously known as Dhauli Shanti Stupa, built on the outskirts of Odisha capital Bhubaneswar, is getting a major revamp from the Odisha government that has drawn up plans to showcase it to the world as a symbol of peace.

The stupa, a major attraction not only for the Buddhists, also draws  Hindus, Christians, Muslims and people of other faiths for its architectural splendour.

Constructed 45 years ago on the banks of the Daya river by a group of Japanese monks led by Nichidatsu Fuji Guruji, where Emperor Asoka (also known as Ashoka) in 261 BC fought the famous Kalinga war and turned from Chandasoka to Dharmasoka, the Peace Pagoda, along with the rock edicts and inscriptions of the Magadhan ruler, offers a memorable glimpses into history.

"At Dhauli, as we learn from history, over one lakh Odia soldiers were killed by Ashoka. Our soldiers fought here very bravely against the mighty Magadhan Army. They preferred death to surrender. After the war was over, the emperor turned from a cruel invader to an apostle of peace. Odisha has been constantly endeavouring to showcase this historical treasure to the entire world on a larger canvas as it preaches peace and humanity," said Odisha tourism and culture minister Ashok Chandra Panda.

"We want to present the historical site to the world as a symbol of peace," he said.

Dr Bimalendu Mohanty, former vice chancellor of Utkal University of Culture and a scholar on Buddhism, said that the Dhauli Shanti Stupa has a special significance because a piece of Buddha's bone has been preserved in it.

"A piece of Buddha's bone was kept in it on October 18, 1972. This makes the place for followers of Buddhism a major place of pilgrimage. For the people of other faiths, the stupa is a testimony to the great historical event of the 3rd Century BC," said Mr Mohanty.

Bhubaneswar mayor Ananta Narayan Jena said, "In order to attract more tourists to the Peace Pagoda, the state tourism department has started a 35-minute light and sound show capturing the glory of the Kalinga Empire, the Kalinga war and transformation of King Ashoka from Chandsoka to Dharmasoka."

The show has been designed with the three-dimensional (3D) projection. There are narrations painted by the famous artist Maria Rud while the background voice for the show is given by Kabir Bedi in English, late  Om Puri in Hindi and Bijay Mohanty in Odia, she said.

According to Arya Kumar Gyanendra, a researcher on Buddhism, the rock edicts found on the foothill of Dhauli reflect King Asoka's concern for peace, kindness and compassion for the mankind and animals.

Here, the omission of the 13th edict is deliberate as it describes Asoka's conquest of Kalinga involving a great carnage, captivity and misery to the people, said Mr Gyanendra.