The remaining 72 seats of Chhattisgarh assembly will go to vote on November 20 as part of a multi-phased voting across five states. 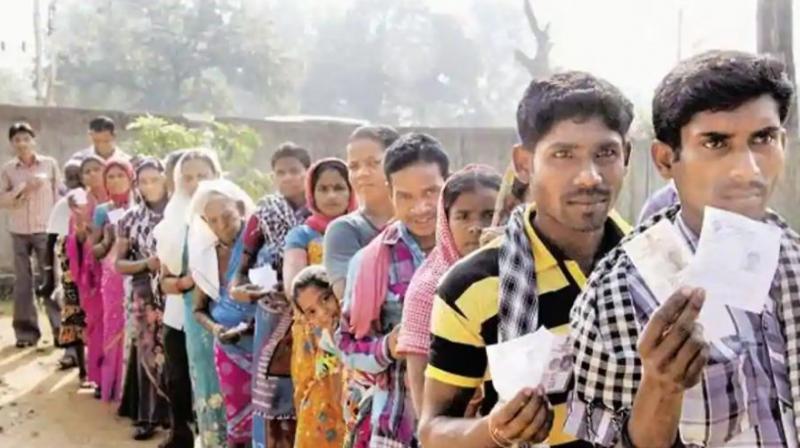 Amid tight security arrangements in the wake of recent Maoist attacks, including one in which a Doordarshan cameraman died with two policemen, voting will take place in 18 assembly constituencies of Chhattisgarh, including 12 ‘red zone’ seats, in the first phase on Monday. (Photo: PTI)

Raipur: Ban on liquor, interest-free loans, almost free rice and a ‘Maoist-free’ state -- political parties have tried every trick in the book to outdo each other with their poll promises as the voting begins Monday with Maoist-affected areas of Chhattisgarh for a multi-phased poll season across five states.

Amid tight security arrangements in the wake of recent Maoist attacks, including one in which a Doordarshan cameraman died with two policemen, voting will take place in 18 assembly constituencies of Chhattisgarh, including 12 ‘red zone’ seats, in the first phase on Monday.

The remaining 72 seats of Chhattisgarh assembly will go to vote on November 20 as part of a multi-phased voting across five states that also include neighbouring Madhya Pradesh, Rajasthan, Telangana and Mizoram. While the last phase of voting is scheduled for December 7, counting of votes for all five states will take place on December 11 for what is being dubbed by political pundits as ‘semi-finals’ before the 2019 Lok Sabha elections when Prime Minister Narendra Modi will make his bid for the second term in office.

In Chhattisgarh, MP and Rajasthan, the ruling BJP is pitted directly against the Congress. However, the Congress’ efforts to forge a broad-based anti-BJP alliance has failed to fructify fully, putting a spanner for the time being in the Opposition’s plans for a ‘grand alliance’ to take on PM Modi in 2019.

While Chhattisgarh has traditionally seen a direct fight between the BJP and the Congress, a third force has emerged this time in the form of an alliance between former Congress chief minister Ajit Jogi’s own party Janata Congress Chhattisgarh and Dalit leader Mayawati’s Bahujan Samaj Party.

The BSP got just one seat in the 2013 assembly election, with the BJP and the Congress cornering 49 and 39, respectively. An independent candidate got one.

Jogi, who served as first chief minister of Chhattisgarh for three years after the state was carved out of Madhya Pradesh in 2000, is still seen as a key force in the state’s political landscape.

The BSP has just one MLA in the outgoing assembly, while its vote share fell to 4.27 per cent in 2013. However, combining of forces between Jogi and Mayawati is being seen as having a multiplier effect, especially in terms of caste equations.

Out of total 90 seats, 29 are reserved for tribals and 10 for Scheduled Castes. In the non-reserved seats, the population of SCs is more than 10 per cent in 40 assemblies. Besides, the other backward classes constitute about 48 per cent of the state’s population.

While Mayawati is known to attract Dalit voters, Jogi himself is said to have a stronghold among voters from his caste base of Mahars and Satnamis. Their alliance has projected Jogi as the state’s chief ministerial candidate and Mayawati for the prime ministerial post in the 2019 Lok Sabha polls.

In what could be seen as indication of the kind of politicking to expect going ahead, the election campaign reached a feverish level in the first phase itself with the arch-rivals BJP and Congress indulging in searing attacks against each other.

While Prime Minister Narendra Modi accused the Congress of backing ‘urban Maoists’, Congress chief Rahul Gandhi alleged that the prime minister and Chhattisgarh Chief Minister Raman Singh did not do any work without “permission” from their “industrial friends”.

Eyeing his fourth term as chief minister after already having ruled Chhattisgarh for a record 15 years in of its 18-year history, Singh hit back by calling Gandhi a mere “entertainment” for people in the state who could be detrimental to his own party. Voting in the chief minister’s constituency will also take place in the first phase.

When not levelling allegations and counter-allegations, the political leaders made a plethora of promises, including big sops, if voted to power.

In its manifesto, the BJP has promised to make Chhattisgarh a “Naxal-free” state and give pension to small and marginal farmers. It also promised to set up multi-speciality hospitals and take the state towards prosperity.

While the BJP leaders hit out at the opposition Congress for offering sops to farmers in its manifesto, the chief minister himself said his party will give Rs 1,000 per month as pension to small and marginal farmers and landless agricultural labourers aged above 60 years, among other freebies.

The BJP manifesto also proposes to increase the minimum support price for several commodities. It has also promised to make the state free of Naxalism.

Besides, it has promised interest-free loans for women entrepreneurs and self-help groups, promotion of tourism, a film city, milk revolution and cow sanctuaries in all divisions.

On the other hand, the Congress manifesto has promised farm loan waiver within 10 days, a higher minimum support price for crops and a ban on liquor.

Besides, it has proposed pension for farmers, halving of domestic electricity bills, rice at the rate of Re 1 only and a monthly stipend to 10 lakh unemployed youths.

Jogi’s party leaders have also promised higher subsidy for rice and other foodgrains, as also a ban on liquor.